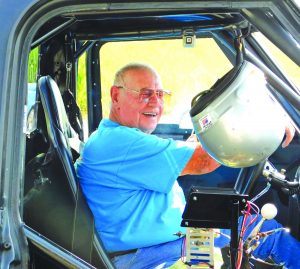 Alfred “Leo” Hohimer, 79, of Cave In Rock, Illinois, passed away at his home on Saturday, January 29, 2022. He was born on March 1st, 1942 in Reed, Kentucky, the son of Clyde and Altha (Chaney) Hohimer.
Leo married the former Barbara Boyd on August 1st of 1965. He was a Pilot on the Cave In Rock Ferry Boat. A trucker known as “Cannonball,” he drove for Hastie Trucking and Millikan Trucking. Leo was a member of the First Baptist Church in Cave-in-Rock, the Harrisburg Hunters Club and an avid Drag Racer.
He is survived by his loving wife, Barbara Hohimer of Cave In Rock; one step grandson, Josh Harper and fiancé Kelsey of Zion, Kentucky; one great-granddaughter, Lyla Marie Harper; one daughter-in-law, Neeve Hohimer of Henderson, Kentucky; three sisters, Alice Faye Carrier of Lake Wales, Florida, Charlotte and Mike Pritchett of Omaha, Wanda Lou and Allen McDermott of Cave In Rock; two brothers, Clyde Eugene and Wilma Hohimer of Cave In Rock, and Thomas Alan Hohimer of Henderson, Kentucky. Also, he is survived by several nieces and nephews, along with several great-nieces and great-nephews.
Leo was preceded in death by his parents; one son, Steven Leon Hohimer; and one brother, Owen Douglas Hohimer.
Visitation for Leo will be held on Monday, January 31st from 5 to 8 p.m. at the Vickery Funeral Chapel in Omaha. Funeral service will be on Tuesday, February 1st at 1 p.m. at the funeral home. Reverend Stan Pennell and Reverend Daniel Acord will be officiating the service. Burial will follow at the Peters Creek Cemetery near Elizabethtown.
In lieu of flowers, donations in Leo’s memory may be made to the Cave In Rock Fire Department or to the Hospice of Southern Illinois.