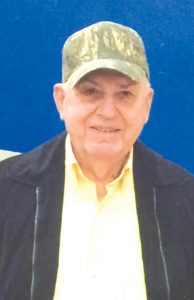 James Noel “Jim” Cullum, 86, of Rosiclare, IL passed away on Wednesday, January 19, 2022 at Hardin County General Hospital in Rosiclare, IL. Jim was born in Hardin County on April 8th, 1935, to Ralph and Mayme (Baugher) Cullum. He was a member of the First Apostolic Church of Rosiclare.
Jim is survived by his wife, Melba (Potts) Cullum of Rosiclare, IL; three children, Paula (Fabian) Lindsey of Lisle, IL Clay (Dena) Cullum of Rosiclare, IL, and Matt (Jessica) Cullum of RR Elizabethtown, IL; 8 grandchildren, Jordan (Nicole) Fowler of Glendale, IL, Brett (Matt) Lewis of Harrisburg, IL, April (Steve) Dollins of Marion, IL, Andrea (Kyle) Bebout of Elizabethtown, IL, Desirae (Tim) Golden of Elizabethtown, IL, Hunter Cullum, Bryson Cullum and Trevor Cullum of RR Elizabethtown, IL; 10 great-grandchildren, Gabriel, Jaidan, Kaizlee, Abigail, Jessica, Tori, Ava, Kyleigh, Walker, and Maggie. He is also survived by his brothers, Bill and Larry Cullum both of RR Elizabethtown, IL.
Jim graduated from Rosiclare High School, then attended Murray State University. He served in the United States Army from 1956-1959. He was stationed in Germany for two years working in the finance office. He purchased a new black Volkswagen and visited many places while in Europe, such as Paris, France, Madrid, Spain, Brussels, Belgium, Zurick, Switzerland, and Amsterdam, Holland. He loved to travel and play on his computer. He liked to hunt and fish with his family and friends. He loved having the family around and spending time with the kids. He loved to watch the Cardinals and his very favorite thing was to tell jokes.
Jim worked for Alcoa, Cullum Mining Company, and Ozark Mahoning in Cowdrey, Colorado as office manager from 1972-1974, then worked for 22 years at the Rosiclare plant as mill superintendent. Jim served on the Rosiclare City Board. He also serviced on the Hardin County General Hospital Board for several years.
Jim was a good man, a kind loving husband, dad, and grandfather. In all of life’s ups and downs, he just reacted to them with, “I wouldn’t have it any other way.” On Valentine’s Day, Melba would receive a red rose with a card that read, “to Foxy Lady from the Great White Hunter.” In return, he would receive a box of chocolates which he loved!
Jim was preceded in death by his parents; sister, Betty; and granddaughter, Briley Cullum.
Services were held at 2 p.m., Sunday January 23, 2022 at the First Apostolic Church of Rosiclare, IL. The family received visitors from noon Sunday until service time at the church. Hardin County Funeral Services oversaw the arrangements. Pastor L.D. (Butch) Gowins officiated. Burial followed services in the Cullum Family Cemetery, RR Elizabethtown, IL. The Paul C. Rowan American Legion Post #571 provided military rites at the cemetery on Sunday.
Memorial contributions may be made to the First Apostolic Church in Rosiclare, IL or the Alzheimer’s Association.

A hundred years from now, it will not matter what my bank account was, the sort of house I lived in, or the kind of car I drove, but the world may be different because I was important in the life of a child.