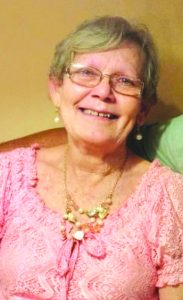 Carolyn Sue Neely, 71, died Monday, May 3, 2021 at 4:40 a.m. at Linda E. White Hospice House in Evansville, IN. She was born July 9, 1949 in Metropolis, IL, the daughter of Clark Parkinson and Bessie Bonnel.
She worked at Abstract and Title as a Closing Title Officer. She retired after 15 years of service.
She was a member of Palestine Church in Golconda, IL until she moved to Evansville in 2018. She married Earl Neely on November 23, 1979 in Henderson, KY.
She was preceded in death by her husband Earl on January 21, 2005; her stepson Gregg Neely in September 2012; and her parents.
She is survived by her sons, Kevin (Lara) Anderson of Fort Branch, IN, Scott (Lindsay) Anderson of Newburgh, IN, and Chris Anderson of Hudson, FL; her stepchildren, Bethellen Mann of Redondo Beach, CA, Todd Patrick Neely of Boulder, CO; her brother, Robert Parkinson of House Springs, MO; 9 grandchildren, Whitney Anderson, Jake Anderson, Caleb Anderson, Keegan Anderson, Wyatt Chaffee, Alyssa Chaffee, Lucy Odom, Reba Riggs (Phillip), Kirk Odom; two great-grandchildren, Julian Anderson and Ida Mae Riggs.
A visitation was held Wednesday, May 5, 2021 from 10:00 a.m. until time of service at the funeral home. Funeral Service was held at 12 noon on Wednesday, May 5, 2021 at Aly Funeral Home in Eddyville, IL with Pastor Kevin Richerson conducting the service. Burial followed at the I.O.O.F. Cemetery in Golconda.
Memorial contributions may be made to The Linda E. White Hospice House at 611 Harriet Street, Evansville, IN 47710.