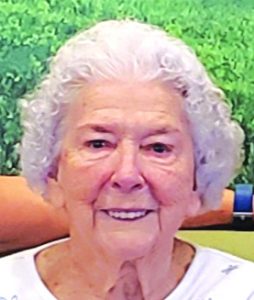 Ruth Stanford Goins, age 86, passed away at 7:24 a.m., Sunday, January 31, 2021, at the Rosiclare Rehabilitation and Health Care Center in Rosiclare, Illinois.
Melva Ruth, better known to her family and friends as “Ruth” was born in Rosiclare, Illinois, on March 27, 1934, the daughter of Willard Ray and Alma Ilene (Riley) Stanford. She was a graduate of Rosiclare High School.
On March 1, 1952, she married the love of her life, Bobby Gene Goins, at the First Christian Church in Rosiclare, Illinois. Bob preceded her in death on March 11, 2013. Bob and Ruth traveled a bit throughout their long marriage, at times living in Arizona, California, Arkansas and Alabama, but they always returned to Hardin County. To this union God blessed them with four daughters and one son.
Ruth always worked alongside Bob in his business endeavors, and for several years they owned and operated the Western Auto Store in Rosiclare. After her daughters were grown, she completed a degree in early childhood education, an accomplishment that made her extremely proud. She then opened a day care center at the church in Rio Dell, California, where Bob pastored at. She was known for her quick wit and she loved to try new things. She even did some belly dancing! She and Bob also joined the circus and traveled with them meeting new friends and making memories.
Ruth was a member of the First Christian Church in Rosiclare, Illinois. She also had an artistic side, expressing herself with writing and painting. Ruth will be remembered as a loving mother and grandmother, who always encouraged her family to strive for the best.
Ruth is survived by her children, Rickie (husband David) Jones of Largo, Florida; Rhonda (husband Louis) Beck of Cooks Mills, Illinois; Robin Hughes of Wetumpka, Alabama; Randee Walsh, of Rosiclare, Illinois; and Joey Goins of Rosiclare, Illinois; sisters, Betty Reed and Sherilee Palmer both of Rosiclare, Illinois; brother, Danny Stanford of Rosiclare, Illinois; 13 grandchildren and several great-grandchildren; and several nieces and nephews.
Ruth was preceded in death by her parents; husband of 62 years, Bobby Gene Goins; son-in-law, Steve Walsh; and brothers Ronald Glen Stanford and Robert Neal Stanford.
Funeral services celebrating Ruth’s life will be held at 1:00 p.m., Saturday, February 6, 2021, at the First Christian Church in Rosiclare, Illinois, with Jon Byers officiating. Burial will be in the Stone Church Cemetery, Stone Church Road, Rosiclare, Illinois. Visitation will be held 1 hour before the service at the church.
Arrangements are under the care of the Meyer Funeral Home in Newton, Illinois. The obituary can be viewed and condolences left at www.meyerfh.com. Those attending the visitation and funeral are reminded to observe customarily accepted social distancing guild lines. The wearing of face mask or coverings is encouraged.