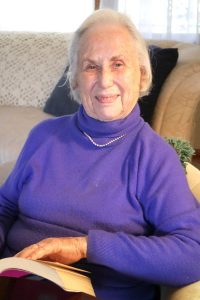 Rebecca Inez Burrum Matlock, 90, of Booneville, passed away Saturday, November 9, 2019 in Durham, North Carolina. Rebecca was born December 7, 1928 in Manchester, Tennessee to the late Hugh Burrum and Leona Graham.
She was a Duke University graduate who married her college sweetheart, Jack F. Matlock Jr., September 2, 1949; a marriage that lasted over 70 years. They entered the Foreign Service in 1956 and served overseas through the 1970s, raising their family in Austria, Germany, the Soviet Union (twice), Ghana and Tanzania. Rebecca and Jack served overseas again in the 1980s when Jack was appointed Ambassador, first to Czechoslovakia and then to the Soviet Union.
Rebecca was an accomplished photographer, showing her work more than 50 times in exhibitions around the world. She also enjoyed crafting rugs inspired by the traditional ryijy rugs of Finland, a country she loved to visit.
After retirement from the Foreign Service in 1991, the Matlocks lived in Princeton, New Jersey before returning to Rebecca’s family home in Booneville, Tennessee in 2013.
Survivors include her husband Jack F. Matlock, Jr.; their children, Jim of Booneville, Hugh of Booneville, Nell (Hu Benton) of Manassas Virginia, David (Natalia Filatova) of Moscow, Russia, and Joe (Rita Senko) of Ozone, Tennessee; their grandchildren, John Benton (Katie Pennell) son of Nell, Nicholas Matlock (son of David), and Cristina Matlock (daughter of Jim); and two great-grandchildren, Helen and George Benton-Pennell.
Graveside services will be conducted Saturday, November 16, at 2 p.m. at Booneville Cemetery, Wilbur Carter officiating. There will be no visitation prior to the service, but a Celebration of Life will be held at the Matlock’s Library House at 3 Booneville Church Road after the service.
Flowers can be sent to the Library House at 3 Booneville Church Road, Fayetteville TN 37334. In lieu of flowers, and in order to recognize Rebecca’s interest in historic preservation or to contribute to the conservation of her favorite bird (the loon), donations are suggested to the Fayetteville-Lincoln County Museum http://www.flcmuseum.com/ or to the Vermont Center for Ecostudies https://vtecostudies.org Jennings-Moore-Cortner Funeral Home in Lynchburg is assisting the family. Jennings-Moore-Cortner Funeral Home, 181 Majors Boulevard, Lynchburg, TN 37352,www.jenningsmoorecortner.com.