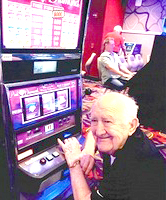 Jackie (Jack) Dean Croft, 89, of Mundelein passed away peacefully on Thursday, October 31, 2019 at Travanse in Grayslake. He was born on July 29, 1930 to Clyde and Cladie Croft of Rosiclare, IL. He grew up in Rosiclare, IL and graduated from Rosiclare High School. Jack served in the U.S. Army.
He was the store manager for Eagle Food Stores for 26 years in Mundelein, Round Lake, Waukegan and Kroger Foods in Rosiclare for 16 years. He enjoyed golfing, bowling, playing bingo and going to the casino. He was a kind and loving man and enjoyed taking naps. He met his wife of 55 years at a roller rink in Harrisburg, IL.
Jack was preceded in death by his wife, Karen Croft; his parents, Clyde and Cladie Croft; his sisters, Betty Ledbetter and Lucille Keaton; and his brother, Richard Croft.
He is survived by his daughters, Kathleen Jacoel and Kimberly Croft; granddaughter Ashley Jacoel; grandsons, Derek (Lisa) Bowlin and Bryan (Bekah) Bowlin; and three great-grandchildren Jack Bowlin, Sean Bowlin and Scarlett Hamel.
Visitation will be held from 1-4 p.m., Saturday, November 30, 2019 at the Kristan Funeral Home, PC 219 West Maple Ave. (2 blocks west of Rt. 45 on Rt. 176), Mundelein. Funeral service will begin at 4 p.m. with Military Funeral Honors.
In lieu of flowers, donations to the Honor Flight Network at www.honorflight.org, the Wounded Warriors Project at www.woundedwarriorproject.org, or the Stephen Siller Tunnel to Towers Foundation at www.tunnel2towers.org.
Out of respect to Jack’s family, members of the Porter family please refrain from attending the visitation and funeral services.