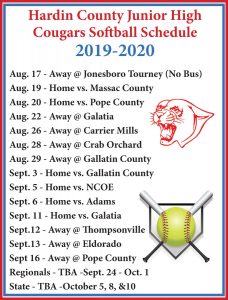 The Hardin County Jr. High Girls Softball team kicked off its season on Saturday, August 10 at home during Slug Fest 2019. In recent years the Jr. High Baseball and Softball teams have invited other schools to play at the Tammy Conn Memorial Tournament to kick off the season. Tammy was a beloved elementary teacher and the school’s Athletic Director until her life was taken from a car accident. Due to pitching rules that are in place they are no longer able to have the Tammy Conn Memorial Tournament. Instead, they now invite other schools to play at Slug Fest, where each team plays one game against a team not usually on their schedule.
Last weekend the girls played in the Anna Jonesboro Tournament where they won the second game. Pictured (below) that day were the Jr. High Lady Cougars, back row: Maddie Davis, Lorelai Hershey, Addi Hubbs, Keisha Phillips, Briley McDowell, Hailey McDowell, Joslin Alexander, Aaliyah Littrell. Front Row: Whitley Fricker, Maci Martin, Alejandra Camargo, Rylie Hall, Mallory Kaylor, Isabella Rose, Reagan Banks, Gracyn Smith. –Greta Smith photo.
The team is coached by Chris McDowell, with Jeremy Littrell and Brad Banks assisting. Get out and support the Lady Cougars! Their next home game is Tuesday, September 3.