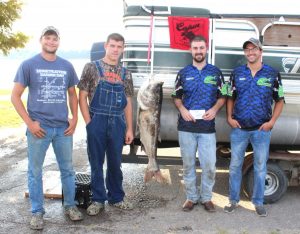 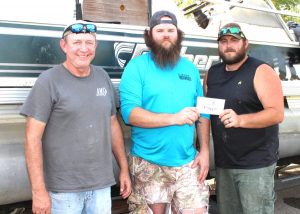 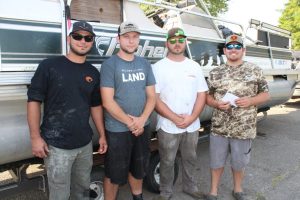 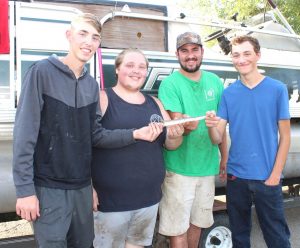 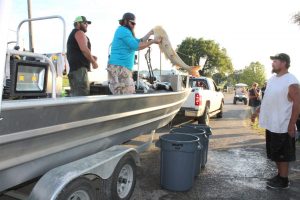 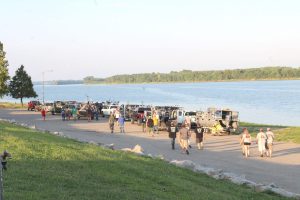 The Rosiclare Fire Department held its 3rd annual Big 15 Bowfishing tournament starting at the Ohio riverfront at the Rosiclare Park and Campground Saturday, August 17 and overnight into Sunday, August 18. In addition to participants from Illinois, others traveled from three neighboring states, Kentucky, Missouri, and Indiana for the competition. Each team had a goal to bring in the most weight of their top 15 carp shot.
At sign up Saturday night, eighteen teams of fishermen reported for the tournament. Some trailered their boats while others navigated by the Ohio River. As the teams registered, trucks trailering boats lined up on the lower parking lot of the park, quickly filling in the area. Teams completed last minute details to get food, supplies, and make last minute adjustments to their bows before a long night on the river. Concessions were sold to raise funds for the Relay for Life. A mandatory meeting was held for boaters, where various donated door prizes were drawn and given to competitors.
At 7 p.m. the bow fishermen were signaled to start the tournament. They set off and scattered to various locations to drop their boats in the Ohio River to battle the invasive carp. Bighead carp commonly weigh about 40 pounds but
have been recorded higher. Silver carp weigh about 20 pounds and are capable of jumping great heights out of the water, potentially injuring recreational boaters and anglers. Some bowfishermen shot alligator gar.
Only 15 of the 18 teams reported for weigh in by 7 a.m. Sunday morning. The others missed out on the delicious free breakfast provided by the Rosiclare Fire Department.
Some teams reported having a rough night of shooting, saying the carp were just not showing themselves as usual until after midnight. Maybe is was due to the beautiful full moon? Despite the luck of some, 4,166 pounds of carp were weighed in that morning.
There was an estimated extra 4,000 pounds of carp that were brought in not eligible for the weigh in. They were scooped up and filled a tandem truck, to be later dumped on a local farm to serve as a natural fertilizer.
Cody Hicks, Flint Lovett, Sawyer York and Travis Spiceland, of team Descalin’ took the 1st place prize of $600 weighing in with 453 pounds, 10 ounces of carp. They also won the Big Fish award for their 39 pound bighead, scoring them an extra $425. This team is from Benton, KY and they were last years winners of the tournament and Big Fish award. DESCALIN’ was one of the teams that actually boated in Saturday night rather than trailering to Rosiclare.
Wayne Swim, Chancy Crowell, and Cole Whitehead of team MEGAMOUTH/NOCKED UP won 2nd place ($300) with a total of 420 pounds and 9 ounces. This team is from Albion, IL.
Cody Guess, Reese Johnson, Evan Owen, and Kyle Heaverin of team QUALITY CARP MANAGEMENT won 3rd place with a total of 386 pounds, 12 ounces. This team is from Grand Rivers, KY. Their prize is free entry for next year’s tournament.
Gunner Schroeder, Drake Massey, Hunter Murphy, and Kaleb Krousy of team RIVERBEND OUTDOORS won Smallest Fish weighing in at 0.5 pounds. They won $50. This team came from Mt. Vernon, IN.
Funds raised from this event benefit the Rosiclare Fire Department to help with equipment and training. Not only did the tournament help contribute to the Rosiclare Fire Department, but it was a great economical boost for the night, with fisherman using Hardin County businesses for last minute supplies.

For information about next year’s tournament, call Rosiclare Volunteer Fireman David Burton at 618-518-9501 or visit the Rosiclare FireDept facebook page.