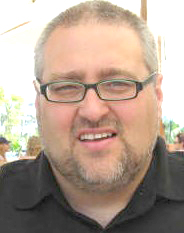 Christopher Allen Cornell, 51, of Oakland, CA was born on September 20, 1967 in Harrisburg, IL and died on Monday, June 10, 2019 in California.
He was a senior web designer for Ondema, Inc. He was also a writer, musician and software developer in the California Bay Area. He wrote in a wide variety of genres including science fiction, humor and historical fantasy. He was the producer and co-host of the Unreliable Narrators podcast about genre fiction and pop culture. He contributed background material and short fiction to game worlds and also composed music for online shows such as Unreliable Narrators, Terror Troop and the E’ville audio drama.
Chris held an M.A. in Radio and Television from San Francisco State University where he was awarded the Stuart M. Hyde Award for Writing in Media. He was a graduate of the Taos Toolbox and Viable Paradise writing workshops and belonged to the Left Coast Writers and Codex professional organizations.
His parents were James A. and Nadine Cornell (former Rosiclare residents). He is survived by sisters , Linda Shepperd of Laporte, CO, Jackie Stone (Mike) of Cheyenne, WY, and Annette Lancial (Tom) of Rock Island, IL; and brothers Scott Cornell of Livermore, CO and Brett Cornell (Colleen) of Corinth, TX.
He was preceded in death by his parents; a brother, Tim; and a sister, Phyllis.
His ashes were spread at the base of an oak tree overlooking a valley in California where he spent most of his adult life.