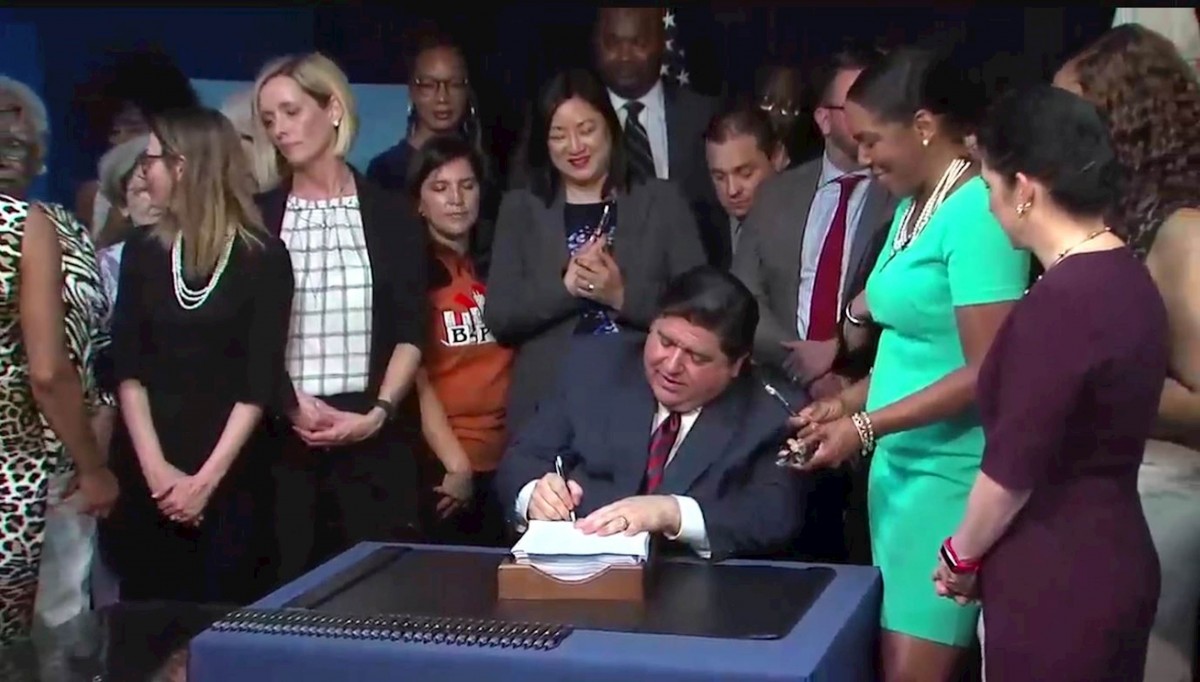 SPRINGFIELD – Gov. J.B. Pritzker signed a new, $40.1 billion state budget bill into law Wednesday, along with bills to fund a long-range capital improvements plan and a bill that would establish a new, multi-bracket income tax structure in Illinois, provided voters approve a constitutional amendment allowing it in the 2020 elections.
He also signed a bill that would establish a system of graduated income tax rates to take effect in 2021, provided that Illinois voters approve a constitutional amendment in November 2020 to allow such a tax system.

The budget bill, Senate Bill 262, adds about $1.14 billion in new spending during the fiscal year that begins July 1. It passed the General Assembly over the weekend with broad bipartisan support, but it came about only after weeks of contentious negotiations between legislative Democrats and Republicans.

“Just a few years ago, simply passing a budget was considered nearly impossible. And for years before that, the budget included gimmicks and tricks, and was balanced in name only,” Pritzker said during a bill-signing ceremony at the Thompson Center in Chicago. “Those days are over. That this budget is balanced and bipartisan demonstrates just how far we have come.”
Some of the highlights of the budget, according to the governor’s office, include an $80 million increase in funding for the troubled Department of Children and Family Services to hire additional staff and to increase reimbursement rates paid to social service providers who work on contract with the agency.

It also includes $107 million in additional funding for the Department of Human Services to increase reimbursement rates for people and agencies that provide home and community based services for the elderly and disabled.

K-12 and higher education will also see funding increases next year, with more than $378 million in new funding going to public schools and another $66.7 million in additional base funding for public universities and community colleges.

The budget plan also includes a full payment into the state’s pension systems. And it adds $410 million to the current fiscal year’s budget to cover costs associated with unpaid union contract obligations dating back to fiscal year 2016.

That new spending was made possible by passage of a revenue bill, Senate Bill 689, that levies a new tax on the private insurance companies that administer the state’s Medicaid program. Money from that assessment will be used to draw down additional federal matching funds, thus freeing up about $530 million in state general revenues to be used for other purposes.
The revenue bill also calls for bringing in additional corporate income tax revenue by “decoupling” a portion of the state tax code from federal tax law. That provision deals specifically with multinational corporations that repatriate assets and cash from offshore accounts back to the United States.

The capital improvements bill, meanwhile, calls for spending an additional $45 billion over the next several years repairing and enhancing the state’s roads, bridges and public transit systems as well as K-12 and higher education campuses, public health clinics and a number of other public facilities.

At the bill signing ceremony, Pritzker was surrounded by a number of Democratic leaders in the General Assembly who were key to pushing the package through the House and Senate.

“For two years in a row, Republicans and Democrats have proven that we can balance the state’s budget with no new taxes on Illinois families,” Durkin said in a statement released Wednesday afternoon.

“However, the graduated tax rates signed into law today are simply the next step to giving Illinois Democrats a blank check for uncontrolled spending for years to come. Illinois families should remain very wary on the rates that are being ‘promised’ today – as Democrats will continue to come back, year after year, and pickpocket more money from Illinois families and businesses.”