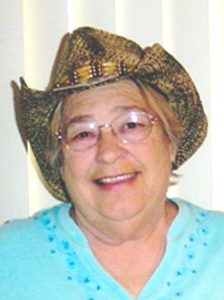 It is with great sadness that the family of Velma F. (Lane) Jenkins announces her passing on Sunday, February 17, 2019, at the age of 81. Velma was born to Arlo and Edna (Winters) Lane
On March 11, 1937 in the community of Rock Creek, Illinois Velma attended Rock Creek Grade School until the age of 14 when she moved to Ypsilanti, MI to live with her sister Mae.
Velma was united in marriage to Clifford L. Jenkins on October 24, 1972 in Phoenix, Arizona. This union brought together five surviving daughters; Paula (Gary) Meitz of Howell, MI, Donna (Bill) Tomasek of St. Charles, IL, Delora (Tom) Smith of Rockford, IL, Vickie (Gene) Cook of Casa Grande, AZ and Mary (Frank) Evans of Coolidge, AZ.
Velma also leaves to mourn her passing two sisters, Opal (Ted) Webster of Rosiclare, IL and Faye Stacey of Elizabethtown, IL; her sister-in-law Barbara Lane of Rosiclare, IL; 17 grandchildren; several great-grandchildren and a host of nieces and nephews.
Velma was preceeded in death by her husband of 26 years; five sisters, Ilene, Lorene, Mary, Ann, and Mae; and four brothers, Glenn, Jim Bob, Don, and Leo.
Velma accepted our Lord and Savior and was baptized in Big Creek at Elizabethtown, IL several years ago as a Baptist.
During her lifetime, besides being a wife and mother, she worked at various occupations. She worked as a waitress, cook, Behavior Health Tech., co-owner of Peter’s Creek Grocery and Feed near Elizabethtown, IL, Certified Nursing Assistant and Registered Nurse. She retired from the Arizona State Hospital in 2002.
She enjoyed spending time with her family, especially her grand and great-grandchildren. She loved going camping and having bon fires, RFD-TV country music programs, farm and ranch programs, and FOX News.
Velma will be lovingly remembered by her daughters and sons-in-law, grandchildren, great-grandchildren, sisters and brothers-in-law, and nieces and nephews.
Services for Velma will be held at Valley of the Sun Mortuary and Cemetary at 10940 E. Chandler Heights Rd., Chandler, AZ 85248 on Monday, February 25, 2019 at 10:00 a.m. After the service a prayer will follow at the graveside.