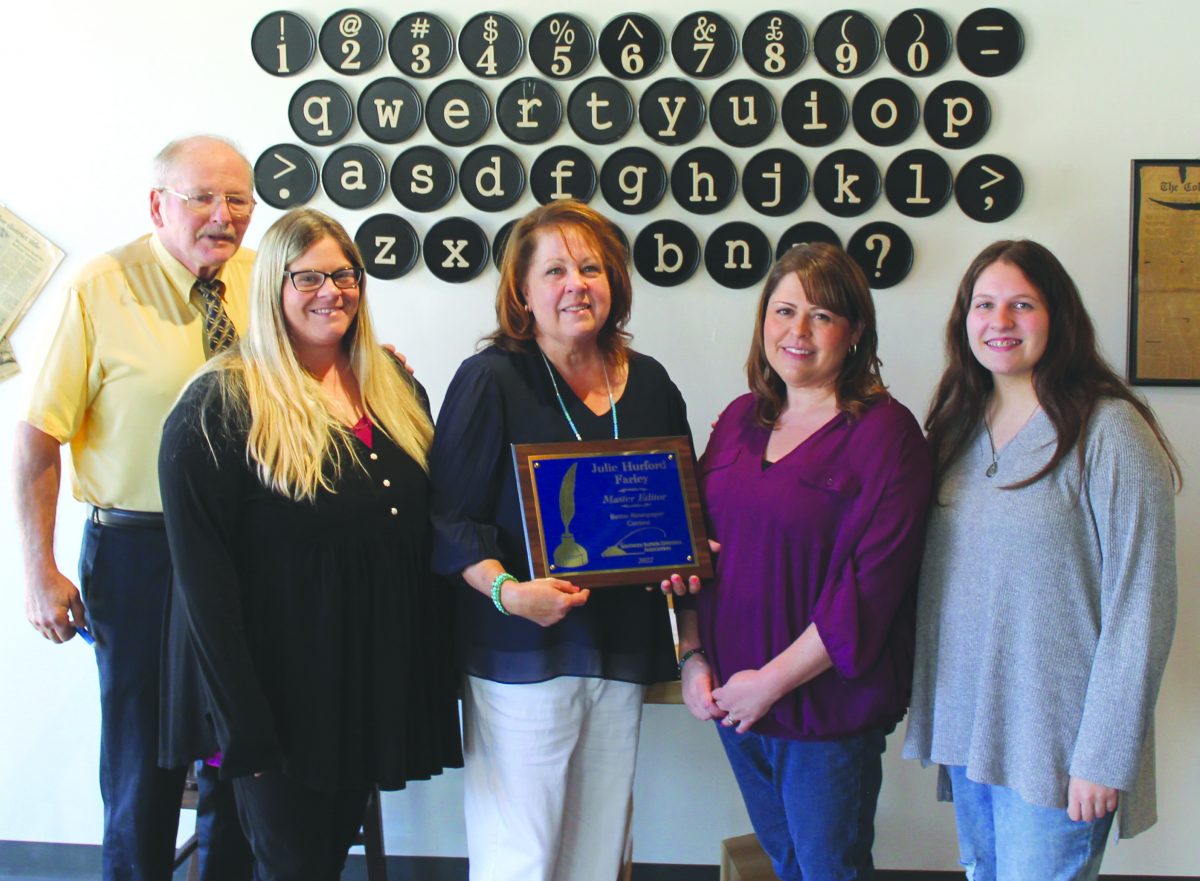 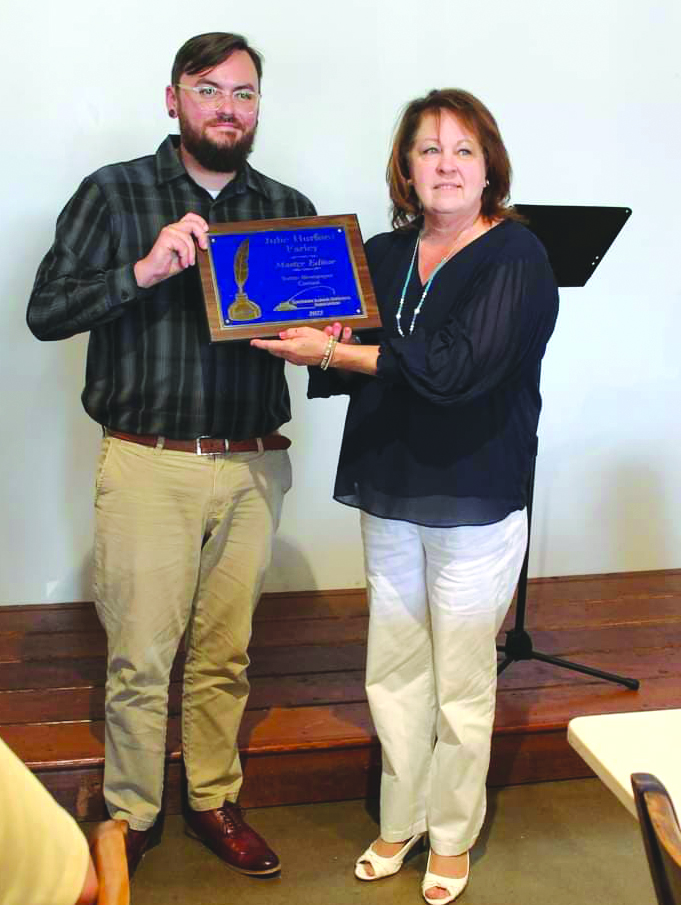 Julia Hurford Farley, 68, was recognized for her dedication and long time service to the newspaper industry, last Friday, September 9, 2022 by being honorably named the 2022 Southern Illinois Editorial Association Master Editor. Julie is the former Hardin County Independent Editor and Publisher.

Julie was nominated for the award by long time friend and fellow publisher, Lonnie Hinton of the Vienna Times.

“Julie is truly dedicated to the newspaper industry and committed to making he father’s legacy live on through her daughters.”

“I’m so honored and humbled to receive the Master Editor award from the Southern Illinois Editorial Association,” said Julie. “My dad, Noel E. Hurford, received the award in 1997. I really feel like this is another award in his honor, because he taught me everything about the newspaper business.” 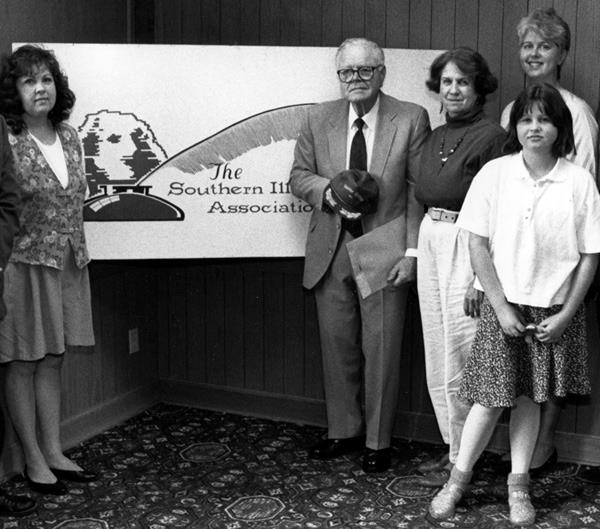 Julie was accompanied to the SIEA Annual Meeting, held at the Old Herald Brewing and Distillery in Collinsville, Illinois, by some of her family members so they could be there as she received her award: husband, Jesse G. “Skipper” Farley; daughters, Jennifer Lane and Heather Rash; and granddaughter Aida Barnard.

Though it was quite a drive, the atmosphere at the Old Herald was perfect for those who work in the newspaper business. Vintage newspaper clippings, art, and props were the items that carried through with a newspaper theme throughout the restaurant. Menu items and beverages had newspaper related names.

Current Editor Jennifer Lane and assistant Heather Rash received three awards on behalf of the Hardin County Independent for the 2022 SIEA Better Newspaper Contest. Those awards were given in the small weekly newspaper category: 1st Place Advertising Excellence; 2nd Place Best Local News Coverage; and Honorable Mention Newspaper Design. This is the third consecutive year that Jennifer and Heather have won awards through this contest. Like Julie gave credit to her dad, Jennifer and Heather give credit to their mom Julie for the things she has taught them about the newspaper business.

How it all began –

Julie Hurford, youngest daughter of the late Noel and Betty Hurford, grew up in Rosiclare, IL with her sister, Susie. Rosiclare, located on the bank of the Ohio River in Hardin County, once was a thriving mining town with rich deposits of fluorspar, lead and zinc. In the 1950’s and 60’s Rosiclare was a great place to raise a family. There was a beautiful riverfront park, movie theatre, roller skating rink, ball field, library, 5 & 10 cent store, Dari Dream and neighborhoods with plenty of playmates–a wonderful atmosphere for kids.

Julie graduated from Rosiclare Community High School in 1972 and got married that summer. In 1976 after her husband attended SIU at Carbondale, the couple moved back to Rosiclare where he was employed at the fluorspar mill in the electrical department.

Julie’s career at the Hardin County Independent in Elizabethtown began that summer when her dad hired her to do proofreading, clerical work and other tasks. Julie spent 32 years working beside her dad and learned every aspect of the newspaper business. 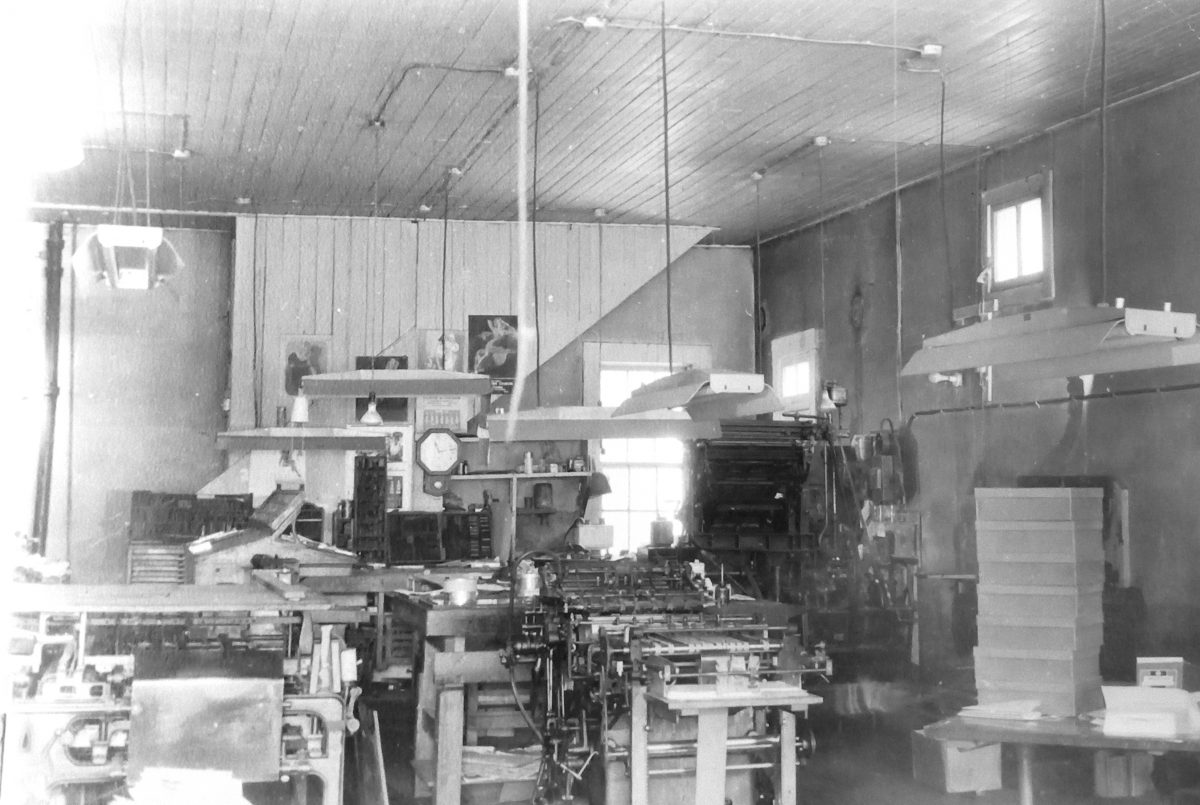 This is a photo of some of the equipment in the work area of the rear of the Hardin County Independent building. In the center of the picture is the Paper Folding Machine that Julie referred to in the article that she used in the 1970s.

“I’m overwhelmed at experiences gained and memories made through the years at the Hardin County Independent,” said Julie. “I began working there in 1976 for my dad when the Linotype, letterpress, folding machine, and printing press were still running. I remember standing at the folding machine, Dad on one side, me on the other, feeding pages into it and having neatly quarter folded copies stacking up as customers waited in line at the front counter for their copies.  I was expecting my first child, Jennifer. Don’t think newspaper ink doesn’t get into your blood.”

Noel Hurford worked at the Independent for Harry L. Porter from the early 1950’s until Porter’s death. Hurford gained Porter’s trust as an exemplary employee and was named editor and Publisher in 1963. Hurford assumed ownership of the newspaper in 1970 after Porter’s death due to heart failure.

The Independent was an ever present influence on Julie and Susie as kids. The family often went along for their dad’s picture taking duties especially on weekends. At around ages 10 and 12, Julie and Susie were brought to the Independent office on occasion by their mother to help with insertions or some type of job work such as compiling calendar pages. That was a treat for them which included lunch at the uptown cafe’ and a bottle of Coca-Cola during a 10 minute break with employees of the Independent. So Julie was no stranger to her dad’s place of work. 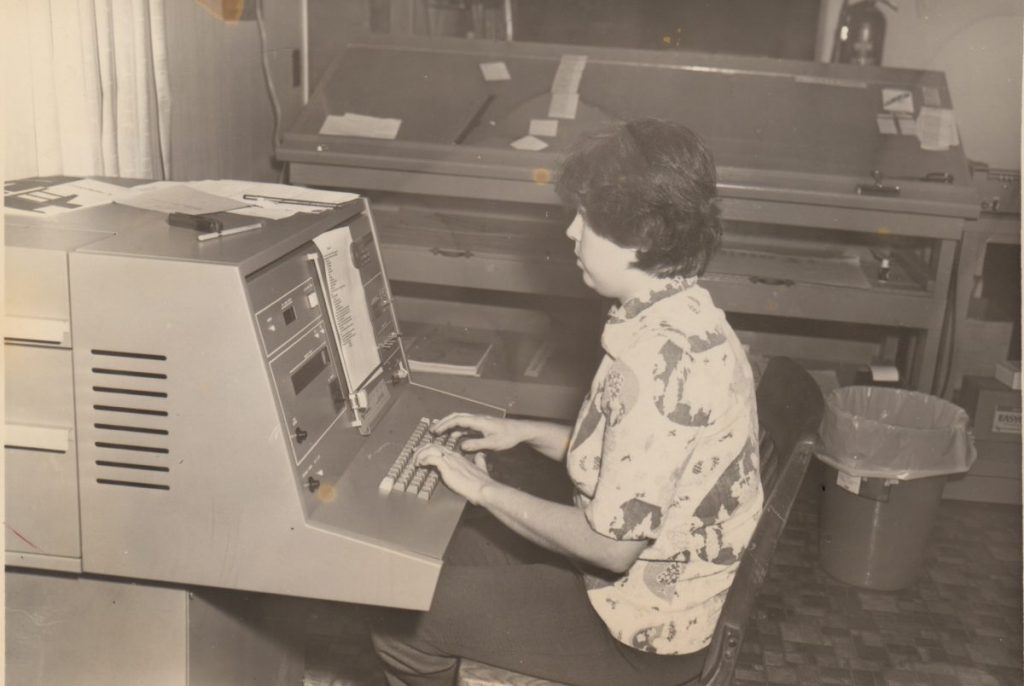 Julie using the Compugraphic Typesetting Machine in the late 1970s. She would type the story into a film box, take the box out of the machine, run the film through a processor, like developing film, and the news article would presented in columns on paper. Next, trim the columns and run it through a wax machine so it could be pasted and rolled on a newspaper page grid. It is like working a big puzzle to fill up the page.

In 1978, Noel converted to computer operations – Compugraphic and paste up. The Independent was one of the last in Southern Illinois to make the change. Those were drastic changes in the way of producing newspapers. Every piece of equipment was replaced with computers within a very short time. Now, pages are made on a computer screen and sent electronically to the printer. This is the age of the e-edition.

“I never imagined that so many changes would take place in my time there,” said Julie. “As my husband often reminds me, change is constant; everything changes.” After doing a lot of deep thinking on her years at the Independent, Julie focused on the word change. Charles Darwin wrote, “It is not the strongest of the species that survive, nor the most intelligent, but the one most responsive to change.” Julie admits that she often resists change in the things that she loves. Roy T. Bennett, author, stated, “Change begins at the end of your comfort zone.” Here’s a quote that we can relate to: “All great changes are preceded by chaos.” — Deepak Chopra. There were times when Julie was learning new techniques at the Independent and she felt everything was in a state of chaos.

Throughout the years working with her dad, Julie said they seldom had a disagreement. She had great respect for her dad. Although she never took one college course, she joked that she had attended the Noel E. Hurford University of Newspapering — and graduated!

Julie was named Editor of the Hardin County Independent in 1998, one year after her dad received the Southern Illinois Editorial Association Master Editor Award. When he died in 2008, she became owner and publisher, as well.

Julie remarried in 2015 to Jesse Farley of Galatia, retired railroad brakeman and coal miner. Julie continued her work at the Independent until retirement in 2018, a service of 42 years. Julie still contributes weekly to the newspaper today, as she compiles articles for the popular feature “Out of the Past”.

Remember that line about newspaper in our blood? Julie gave ownership of the Independent to her first born daughter, Jennifer Rash Lane, in 2016 when she became Publisher and Editor. Jennifer began working at the Independent in 2013.

Julie’s youngest daughter, Heather Rash, is her sister’s only employee. She joined Jennifer in 2017. Both are dedicated to the continuation of the Independent as long as subscribers, advertisers and readers will support it. They bring ability, energy and fresh ideas to each issue.

Julie is quick to point out that both daughters are residents of Rosiclare with families of their own, as well as her sister Susie who assisted at the newspaper after her retirement as an architect.

Julie’s grandson Sean Lane has helped with delivery of the paper as he drives to Murray, KY each week to pick up the fresh, newly printed copies. Julie’s granddaughter Aida Barnard has assisted the business with typing articles and completing odd jobs around the office. Will one of the grandchildren take over someday? We will see.

“One thing that seems never to change is our office building – the two story, red brick building, over 100 years old (built around 1884), at the corner of First and Locust streets in Elizabethtown,” said Julie. “To think that my family, beginning with my dad, has entered that building for nearly 70 years to produce a weekly edition of community news and events. It amazes me when I really stop and think about it. I could write a book about my experiences and memories, and I think I will, for my family—my five grandchildren in particular. I love to sit in front of a blank computer screen and write those stories.” 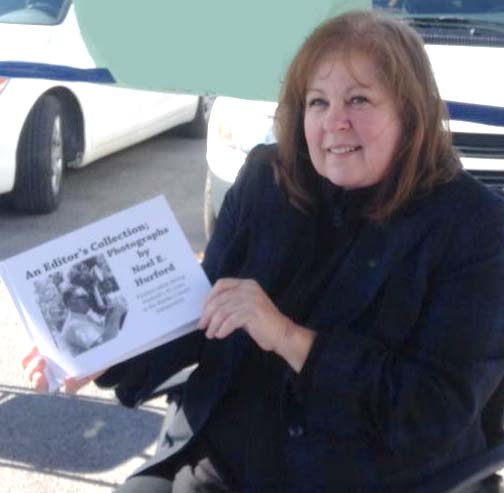 2014 – Julia Hurford Farley selling her book at a stand at the Fluorspar Festival.

Speaking of books, Julie published one in 2014 about her dad – An Editor’s Collection; Photographs by Noel E. Hurford. The book tells a story in pictures of the way it was in the newspaper business when Julie was growing up and the great sense of community that the newspaper represented. That goal continues today with each issue focusing on the news that affects people in Hardin County and beyond. The book is available at the office for $15.

“The newspaper is a historical documentation,” said Julie. “I hope we never lose sight of the importance of that in the newspaper business today. May newspapers live on, no matter what changes may come.” 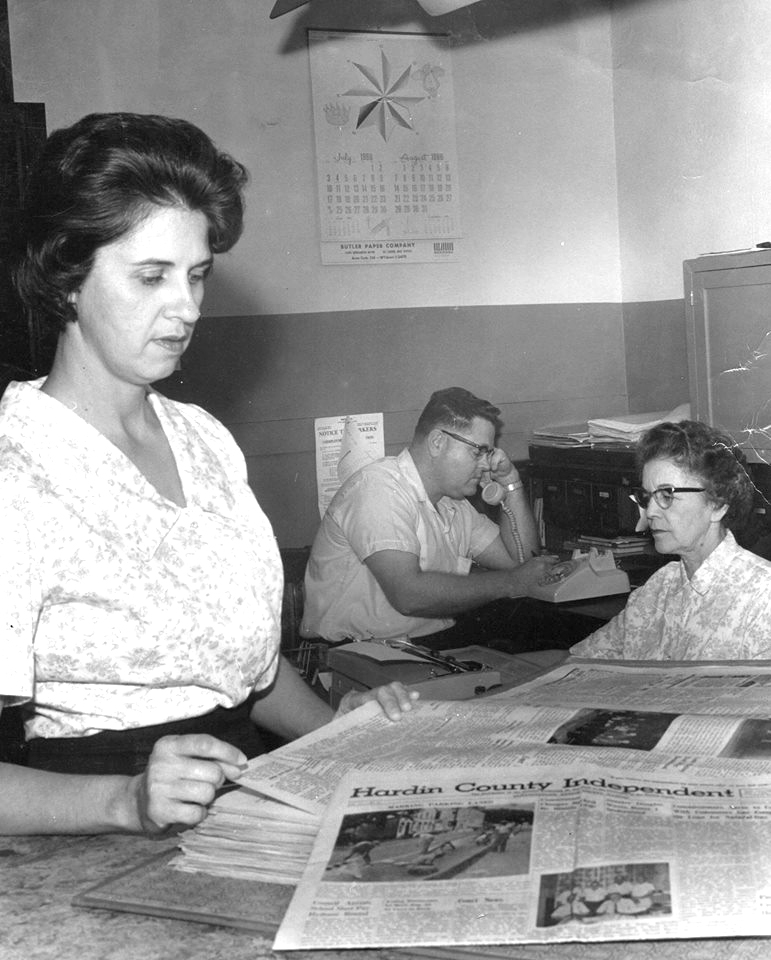