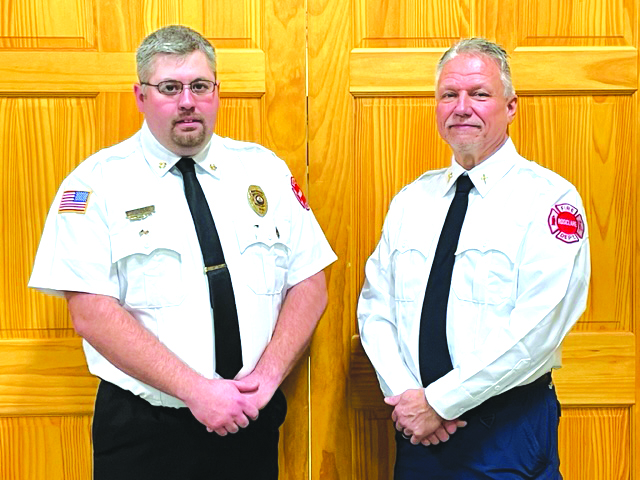 When Andy Atkinson was voted in as the Rosiclare Fire Chief last May, the first new addition he wanted to make to the Rosiclare Volunteer Fire Department was to add a chaplain to the roster. Chief Atkinson presented his idea during one of the fire meetings and all the firemen agreed that it would be a good addition. Chief Atkinson said he would invite several chaplain candidates to their meetings and have the fire department decide.
Chief Atkinson said the role of a chaplain in a fire department is very important and similar to role as an assistant chief. In ranks, the chaplain is one step below the chief and over everyone else, as a support to all.
“I believe in prayer,” said Chief Atkinson. “It never hurts to have a prayer. I want it to come from someone who has a good a word and someone others can trust in. I wanted to make room for that new person to become part of us.”
Greg Love was the first pastor to be invited in. After everyone got to meet him and talk with him, the department decided they liked him. Love is a quiet guy and most there didn’t know him on a personal level, but knew he had a good reputation in the community. Chief Atkinson agreed that he was a good choice and it would give everyone a chance to get to know him all together. The department voted him in July.
When Love was approached for the chaplain position, he wondered how he could be a help to the department. Chief Atkinson said his main duty would be to lend an ear to listen, pray over the fire calls and activities of the department, and support families, the chief, and firefighters on the scene as they are going through a fire or emergency crisis.
“I want to help in whatever roll I can and wherever I am needed at the time to alleviate some of the stress on the chief and others,” said Chaplain Love. “A fire chief has many things going on at the scene, while the personal needs of the individuals at risk or at loss at that moment are hard for him to address.”
Because many of the firemen have day jobs, it is hard to get the volunteers needed during the day, so Chaplain Love is also training to fight fires, drive the trucks, fill the trucks, and run the equipment. He has been a great support to the department since he is retired and can be there during those day time calls when they lack volunteers.
Chaplain Love has already served firemen and victims of fire in his new role. This summer one of the homes that caught fire was a total loss. Chief Atkinson asked the woman if she would like for the chaplain to pray with her. She expressed thankfulness for that during her time of need and Chaplain Love prayed for her right there in her front yard. Neighbors reported to Chief Atkinson that they were impressed when they saw a group of firemen gather for the prayer and other firemen bow their heads during the woman’s crisis.
“That was different for us. It makes you feel good,” said Chief Atkinson. Many of the firemen reflected on the experience at the next meeting saying they were blessed by it.
Chaplain Love has been able to talk with and pray for several of the firemen within the department since he has taken the role. Firemen go through a lot of difficult situations in their role and it all needs to be processed.
Chief Atkinson said he was driving a truck to a fire and looked over and noticed Chaplain Love praying. Atkinson said, out of respect, he remove his hat on the tail end of it and thought that it was such a comfort to know that the emergency situation ahead of them was already being addressed by God.
“Prayer makes a difference and I have made it a purpose in this role to help carry their load,” said Chaplain Love. “I respect this position and don’t want anyone to feel awkward because of my presence.” Chaplain Love said he wasn’t sure how he would be accepted in the group and didn’t want to force himself into the activities. He said he has felt welcomed and can see his acceptance in the group as it has been requested of him to lead public prayer before different events, like the Annual Bowfishing Tournament and the Fluorspar Festival Parade.
Chief Atkinson said not only does Chaplain Love support the firemen and families, but Love’s role has influenced a higher level of professionalism within the department. For example, foul language has decreased. Chief Atkinson said he is working on that area himself, especially when the stresses of role get to him. He realizes that the families in crisis don’t need to hear that, nor do his firemen.
Chief Atkinson requested that Chaplain Love purchase a bible that would suit the department. The high quality, large print, standard King James Bible is considered the department’s bible and can be used at fire department related events like a funeral or wedding, or when needed to be read from. Chief Atkinson said he would like for it to remain as part of the department indefinitely through the years.
Chaplain Love is the first ever officially appointed chaplain for the Rosiclare Fire Department. He is also believed to be one of the few volunteer chaplain in all of Southern Illinois.
Chaplain Love represents the fire department and fully supports them in a non-denominational role. He considers his pastoral role in the community and in his personal life to be separate.
Love, who retired from nearly 30 years of employment with the Shawnee Correctional Center in 2014 was recently voted in as full time pastor at the First Apostolic Church in Rosiclare. He served as Assistant Pastor for Lowell “Butch” Gowins for several years until Butch’s recent retirement.

Currently, all spots are filled for the Rosiclare Fire Department, but if individuals are interested in applying to be a volunteer firefighter, they may fill out an application and may be considered if an opening comes available. 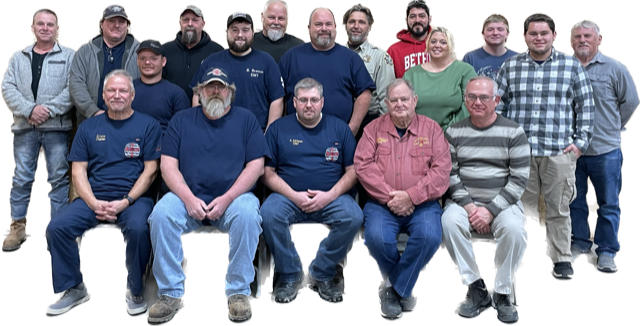 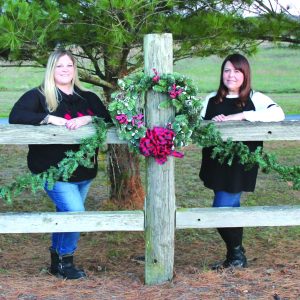