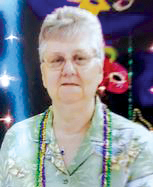 Dorothy May Turner, 81, of Rosiclare, IL passed away on November 20, 2022 at 10:13 p.m. at the Rosiclare Rehabilitation and Health Care Center. Dorothy was born in Cave-In-Rock, IL on September 17, 1941 to Houston and Gladys Jackson.
After graduating from Cave-In-Rock in 1959, Dorothy married James Turner on May 6, 1960 and in that union they were blessed with two children, Paul Wayne and Ruth Ann.
After being a stay at home mom for many years, Dorothy started a job at Bob’s Food Mart in Rosiclare. She worked for several years there until being diagnosed with cancer. (She was a survivor!). She worked a short time for a chiropractor’s office as a receptionist as well as sitting with the elderly if needed. Dorothy was also a loved member of the First Apostolic Church in Rosiclare. Her faith was very important to her.
Grandkids and great-grandkids were Dorothy’s heart. There was nothing she wouldn’t do for them. (That’s what Granny’s do!)
She is survived by one son, Paul (Debra) Turner and one daughter, Ruth Boyd; four grandchildren and six great-grandchildren. Dorothy did leave behind a special aunt, (more like a cousin) Freda Hodge and an uncle, Herbert Belt.
Dorothy was preceded in death by her parents; a step father; and husband, Jimmy.
Funeral services will be held on Saturday, November 26, 2022 at 1:00 p.m. Hardin County Funeral Services in Rosiclare, IL with interment in Empire Cemetery in Elizabethtown, IL. Visitation is scheduled for 11 a.m. until service time Saturday at the funeral home.