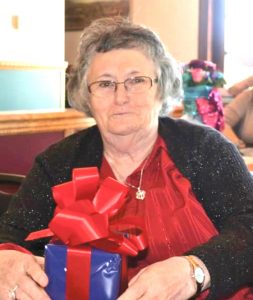 Betty Louise Atkinson (Winters) of Rosiclare, IL passed away on Sunday, October 16, 2022 in Evansville, IN with family at her bedside. She was born in Elizabethtown, IL to Frankie and Myrtle (Gilland) Winters on January 18, 1945.
She grew up on the family farm and learned many things that shaped her into the hard worker she always was. Betty was a wonderful mother and grandmother to many people during her life, even to those that were not blood. If someone needed a place to stay or a plate to eat, they could always go to Betty’s house.
Betty held many occupations throughout her lifetime. She has worked as a factory worker, CNA, EMT, school bus driver, and most memorably was the business that she and her late husband, Gene, started together called Atkinson Salvage. She later retired in 2012 from Rides Mass Transit. After retirement she continued to work in the office of Atkinson Salvage that is now ran by her son, Greg.
Betty married Harold Eugene (Gene) Atkinson in September 1963. They enjoyed 31 years of marriage together before Gene’s passing in 1994. Gene was described as “my one and only true love” by Betty. After his passing she continued to write him letters almost daily. Their love story is truly one to be remembered. Together Betty and Gene had four children, all boys.
Betty was preceded in death by her parents; seven brothers, Adrian Arvel, Donald Ray, Robert Eugene, Ronnie Joe, Marvin D, Melvin Mitchelle, and Calvin Winters; two sisters, Arvetta Irene and Gladys Mildred; her beloved husband, Gene; and one son Russell Eugene.
She is survived by her three sons, Marvin Wade Atkinson, Gregory Wayne (Pamela) Atkinson, Harold Wesley Atkinson and his long time girlfriend Haley Winters; one sister, Phyllis (Gary) Cowsert; one brother, William Harvey (Judy) Winters; three grandchildren, Dakota (Devan) Woolverton, Emillee Atkinson, and Dustin Adams; five great-grandchildren, Keegan Wayne Woolverton, Kyleigh Elizabeth Woolverton, Kaelynn Nicole Woolverton, Kiera Jade Woolverton, and Ava Rose; many cousins, nieces and nephews, including one special niece, Sarah Winters, whom Betty had taken in to raise as one of her own.
Funeral service will be held at 2:00 p.m. on Saturday, October 22, 2022 at Aly Funeral Home in Eddyville. Burial will follow at Adams Cemetery. Visitation will be from 10:00 a.m. until time of service on Saturday at the funeral home.