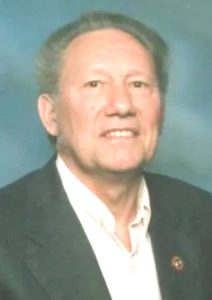 Ronald Gene Potts, 86, of Scipio, left this world on Wednesday, September 21, 2022. He died peacefully at home, surrounded by his family. Ron was born in Rosiclare, Illinois on August 28, 1936. He was the son of Thomas Ray and Norma Fowler Potts.
He served in the U.S. Navy aboard the aircraft carrier USS Essex from 1953-1957.
Ron married his “Pretty Girl down the Road”, Virginia R. May on August 23, 1958 in Golconda, IL. They spent 64 blessed years together. Their union resulted in three children: Dusty Allen Potts, Felicia Diana Potts of Scipio, and Gregory Wayne Potts of Hope.
He is survived by his wife, Virginia Potts; children, Dusty, Felicia, Greg (Angela); and two grandsons, Dusty LeGene “Boomer” Potts and Trevor Silas Potts (Nikki); as well as a sister, Melba Cullum of Rosiclare, IL; a brother, Bill (Joy) Potts of Anchorage, AK; and a daughter-in-law, Betty Potts.
He was preceded in death by his parents; and siblings, Bob Potts, Ramona Lanham, Janet Cornell, Myrna Cowsert and Michele Tinalt.
Ron appreciated music, especially Bluegrass. He was a self-taught musician, who played banjo, fiddle, mandolin, guitar and piano, but his instrument of choice was the upright bass. He played with several local bands including Elvin Rooks and the Bluegrass Ramblers, Here and Gone and James White & Deercreek. He played many Bluegrass festivals, including Bill Monroe’s Bean Blossom Festival. Throughout his musical career, he recorded several albums.
Ron enjoyed working daily crossword puzzles and attending antique tractor shows.
Ron was a tool and die maker with Arvin Industries Gladstone plant. He retired after 55 years in 2014.
As per his request, Ron was cremated, and no public services were held. A celebration of his life will follow at a later date. Bass & Gasper Funeral Home and Crematory has been entrusted with the arrangements.
Online condolences can be made to the family at www.bassgasper.com .