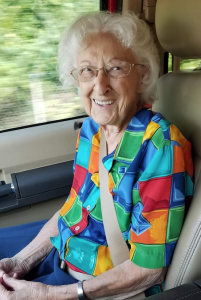 Helen Juanita Foster, who was called “Momma” by her son and “Mamaw” by her granddaughter, departed her loving family on Saturday, September 17, 2022. Juanita was born in the Sulfur Springs community in rural Pope County on January 5, 1930, to Almon and Alma “Grandma” (Randolph) Killingsworth.
Juanita attended the Harrisburg Beauty Academy and obtained her beautician’s license in 1946. After receiving her license Juanita opened her own beauty shop in 1946 and continued working as a beautician there until 1955.
During this time is when she met the love of her life, John Luther Foster, who was employed as a beauty supply salesman. After dating for a time, Helen Juanita Killingsworth married John Luther Foster on September 14, 1947.
Juanita was mother to one son, Perry Lee Foster. She and John raised Perry with love and devotion for the first few years of his life in Golconda, IL, and then in 1973 they moved to Rosiclare, IL, where she called home until her passing.
John and Juanita moved to Golconda, IL, where from the years of 1956 to 1973 they owned and ran the Lighthouse Tavern. She enjoyed working as the cook there. Juanita loved to talk to the patrons of the Lighthouse because she never met a stranger. In 1973 John and Juanita moved to Rosiclare, IL where they purchased the Dari Dream. After remodeling it to accommodate inside seating, they officially opened the Dari Dream in 1974. Juanita and her mother, affectionately known as Grandma by most, worked as the cooks. Once again Juanita never met a stranger she wouldn’t talk to. She loved to help others any time she could and that personal touch as well as her and Grandma’s great cooking kept the Dari Dream open for many years until they decided it was time to sell.
During John and Juanita’s early years of marriage they owned several different boats and loved to spend time on the river where Juanita loved to water ski. After Perry was born, she and John decided lake life was more suited for a family so they swapped time spent mostly on the river to a peaceful, more slow-paced life on Kentucky Lake. They owned several different houseboats over the years that they chose to dock at The Moor’s Marina in Gilbertsville, KY. This is where you would find Juanita on the weekends, enjoying family life. She and John along with Grandma and Perry enjoyed many days and made many friends on Kentucky Lake until John’s health would no longer allow them to do so.
After a short time of retirement from the Dari Dream Juanita decided retirement life was not for her. She applied at Hardin County’s Golden Circle to be a chore housekeeper. She worked there for several years even though her family encouraged her to retire and enjoy life. There was a time when she was at a new doctor’s office and he was asking her questions, he marked retired on her paperwork and then said it out loud. She immediately said, “Oh no honey, I still work. I have to take care of my old people, they need me.” Needless to say, he was shocked because she was in her seventies. That was Juanita. Even though she was older than most of the clients she worked for, she had a loving and caring personality and always wanted to help others.
Juanita was preceded in death by her husband, John Luther Foster; her parents, Almon and Alma “Grandma” Killingsworth; and a brother, whom Perry is named after, Perry Lee Killingsworth, who died shortly after his birth.
Juanita has left to mourn her passing, her son, Perry Lee Foster, Cave in Rock, IL; granddaughter, Ashley (Kenny) Barnes, Marion, IL; a sister-in-law Alice Weed, Benton, IL; a very special nephew and his husband, Fred (Stephen) Hall-Freeman who introduced her to Florida life; and a host of other nieces, nephews and cousins, as well as many friends and neighbors.
God must have needed a very special angel because he took a sweet, kind, caring, selfless person when he took Juanita. She was definitely one of a kind and will be greatly missed.
Services will be held at Hardin County Funeral Service Rosiclare, IL. Visitation will be held on Thursday, September 22, 2022, with family visitation from 4 to 5 p.m. and the public is welcome to call from 5 to 8 p.m.. Services will be held on Friday, September 23, 2022, at 11 a.m. at the funeral home. Visitors may call from 9 a.m. until service time. Interment will be at the Lindale Memorial Cemetery, in Eldorado, IL.