Cougars made history by winning two championships in one day, Saturday, Jan. 29! The Jr. High Boys Basketball Team won Regionals and the High School Boys Basketball Team won GEC! The teams took this picture together Tuesday morning to commemorate their wins. Both teams have supported and cheered each other on throughout the tournaments. — Jessica Headlam photo.

The day started with the Jr. High Boys Basketball team playing for the Regional Championship at Oxford Gymnasium. The Cougars were led by Head Coach Brian Banks and Assistant Coach Justin Smith. The Cougars advanced to the finals after winning the semi final contest against the Thompsonville Tigers 62-18 on Thursday night. Brandon Dutton and Landon Fricker led the Cougars with 18 and 11 points respectively.
Saturday’s final found the Cougars hosting the New Simpson Hill Mustangs. Hardin County had faced the New Simpson Hill team earlier in the season with the Mustangs handing the Cougars one of their 4 losses.
The Cougars were out to avenge this loss and win their THIRD consecutive Regional Championship. The Cougars came out strong in the 1st quarter with a score of 21-4. The Cougars never looked back with a final score of 58-36. Bryden Banks and Brandon Dutton led the Cougars each having 18 points.
The Jr High Cougars are state bound Saturday, February 5th to play Trinity St. John-Immanuel Lutheran Co-op at 5:00 p.m. The contest will be played at Pinckneyville High School in Pinckneyville, IL. Come out and support these young men!
High School Cougars are GEC Champions

The Hardin County High School Boys Basketball team headed to the GEC Championship game Saturday evening at SIC. Head Coach Rodney Lane, Assistants Jason Vaughn, Randy Patterson, and Ryan Mitchell and the Cougars entered the tournament as the top seed.
In the first round of the tournament, the Cougars defeated the Thompsonville Tigers 57-30. They moved on to play the Pope County Pirates Friday evening. The Cougars survived this game winning 37-29 to advance to the Championship Game.
The Cougars faced the NCOE Cardinals for 1st place in the tournament. The Cardinals kept the game close with the Cougars until the 3rd quarter when Gavin Smith shot three 3 point shots to give the Cougars a solid lead. Jake Vaughn finished as top scorer with 19 points and Kailen Gerdes with 10 points. The final score was 48-36 with the Cougars claiming the GEC Championship for the first time since 2008.
Saturday was a great day to be a Cougar basketball player and fan. Both Cougar teams had a crowd full of energized fans supporting them in their exciting wins. The community came to support these young men and give them that extra push to bring the trophies home. Both teams would love to see the stands packed to finish out the season. 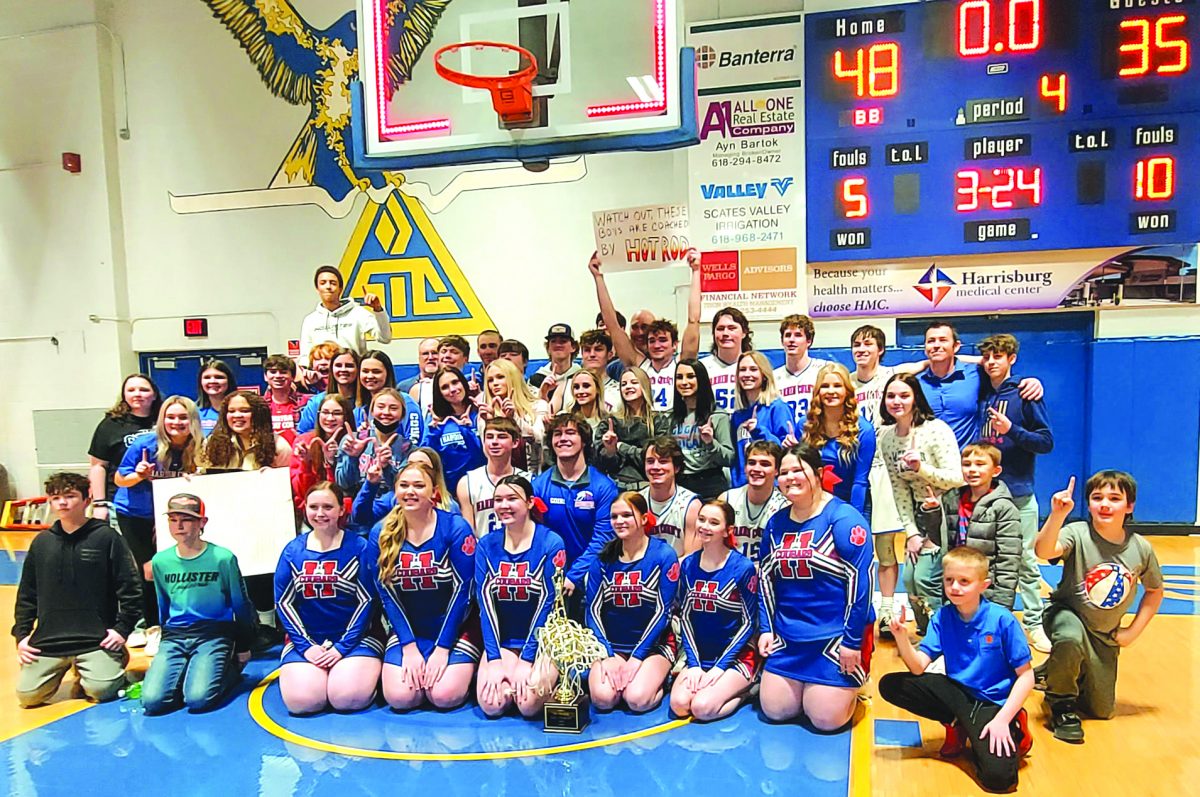