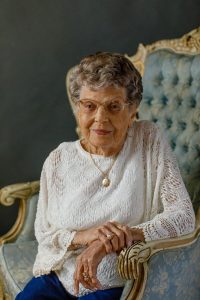 Dorothy Faye Williams, age 87, of Herod, Illinois, went to be with her Lord and Savior at 5:10 p.m, Friday, December 3, 2021, at her home.
Funeral services celebrating Dorothy’s life will be held at 10:00 a.m. – Thursday, December 9, 2021, at the Rudement Social Brethren Church, in the Rudement Community, south of Harrisburg, Illinois. Burial will be in the Sunset Lawn Cemetery in Harrisburg, Illinois. Visitation will be Wednesday, December 8, 2021 from 5:00 – 8:00 p.m. at the Church.
In loving memory of Dorothy, memorials may be made to the Rudement Social Brethren Church, and can be mailed to: The Williams Family 26 Henry Hick Road, Herod, Illinois 62947.
Arrangements are under the care of the Meyer Funeral Home in Newton, Illinois, and the Aly Funeral Home in Eddyville, Illinois. The obituary can be viewed and condolences left at www.meyerfh.com.
Dorothy was born on October 21, 1934, in Harrisburg, Illinois, the daughter of Otto and Augusta (Wiedemann) Barnett. The youngest of four children, Dorothy grew up in the Dorris Heights neighborhood where she was a member of the Dorris Heights Methodist Church. She attended Harrisburg Township High School, where she met her sweetheart and future husband, H. Bob Williams. Shortly after graduating high school, Dorothy and Bob were united in marriage on June 4, 1954, in Harrisburg, Illinois.
After their marriage they moved to Rolla, Missouri, so that Bob could finish college. There, they met lifelong friends Pete and Janet Weitzel and Charlie and Tiki Miller. They remained close for their entire lives.
While living in Rolla, Dorothy gave birth to their first child, Beecher in 1955. While juggling a household and a new baby, Dorothy helped Bob with his course work – a fact that became family legend over the years. From calculus to chemistry to Latin, Dorothy was academically gifted.
After leaving Rolla, Dorothy moved with Bob to Fort Bragg, where he was stationed with the U.S. Army.
Eventually, they moved back to Illinois, to Rudement, where they lived when their second child, Mark, was born in 1959. Eventually they moved to the family farm near Herod, where they put down permanent roots. Their last child, Susan, was born in 1964.
Over the years Dorothy worked a variety of jobs, most notably as a postal carrier for the Herod Post Office. She also was a bookkeeper for the family business, Williams Quarry.
After being widowed at the young age of 55, Dorothy spent much of her time traveling, playing piano and doting on her family.
She was a long time and active member of the Rudement Social Brethren Church, where she played piano or organ every Sunday and taught Sunday School.
She was also a member of the Shawnee Happy Red Hatters and spent significant time socializing with her close friends.
Dorothy will be joyfully remembered for her quick wit, salacious joke-telling ability and generous spirit. She was known far and wide for her ability to recall the family history of any given acquaintance as well as her uncanny skill to play any tune on the piano, by ear.
Dorothy delighted her grandchildren and great-grandchildren for hours and hours on the piano and organ. She frequently played at weddings, funerals and accompanied students during band completions. Piano was a true joy in her life and she was able to share it with many others. One of her favorite things was to call up friends and family on their birthdays and play them “Happy Birthday.”
Dorothy leaves behind a legacy of love and scores of family and friends that celebrate her life. She was, and still is, a shining beacon of light for an entire community.
Dorothy is survived by her children, H. Beecher (Helen) Williams of Herod, Illinois, Mark (Nadine) Williams of Herod, Illinois, and Susan (Kelvin) Kunath of Golconda, Illinois; grandchildren, Lauren (Bill) Sanders of Equality, Illinois, Jessica (Josh) Wagner of Golconda, Illinois, and Molly Williams, Clinton, Massachusetts, Kelvin (Patti Mone) Kunath II, Harrisburg, Illinois, and Kyle (Paxton) Kunath of Macedonia, Illinois; great-granddaughters, Mattie, Meredith, Piper, Haddy, Cora and Avery. She is also survived by her brother, Gene Barnett, of Homewood, Illinois; sisters-in-law Jeanne Barnett of Evansville, Indiana and Brenda Williams Pingleton of Harrisburg, Illinois; along with several nieces, nephews, cousins and special friends.
Dorothy was preceded in death by her parents; husband, Bob on February 21, 1990; two brothers, Marvin and Rudolph Barnett; father-in-law and mother-in-law, H. Beecher and Mattie (Hamp) Williams; brother-in-law, Jim Williams; and sisters-in-law Edna Barnett, Sandy Barnett and Margueriete (Randall) Doty.