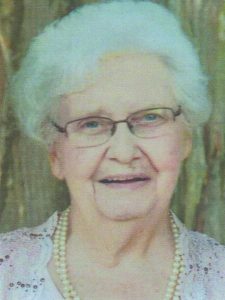 Ramona “Faye” Bledsoe, 92, of Anna, Illinois, passed away Tuesday, July 27, 2021 at the home of her daughter and son-in-law, Ken and Marcia Bledsoe Matthias. Faye was born on July 6, 1929 in Woodlawn, Illinois, the daughter of Wayman Berkley and Iva Pearl (Johnson) Hogshead. She married Clarence Thomas Bledsoe on January 13, 1951 at the Central Christian Church in Mt. Vernon, Illinois. He preceded her in death on May 22, 1988.
Faye is survived by her son, Michael Bledsoe of Anna; her daughters, Sharon (Jeff) Humm of Rosiclare and Marcia (Ken) Matthias of Carbondale; four grandchildren, Miranda Carter-Hutchinson, Meagan (Mike) Carver and Jenna (Eammon) Esteghamat, Krystal Humm (Mark) Bryant; a beloved great-grandson, Cody L. Hutchinson, and four other great-grandsons, Dawson Hubbs, Cannon Bryant, Alan Carver and Noah Carver; nieces, nephews, other relatives and many, many friends.
She was preceded in death by her parents; husband; a sister, Jewell Marie Doyle; and a brother, Dale Weldon Hogshead.
Faye was a loving wife, mother, and grandmother who was devoted to her family, helping her neighbors and serving her church. She was a member of the First Christian Church of Anna, IL. Faye retired as an administrative secretary at Choate Mental Health in Anna.
Funeral services for Ramona “Faye” Bledsoe were held at 12:00 p.m., Saturday, July 31, 2021 at Rendleman and Hileman Funeral Home in Anna. Pastor Dee Armes officiated the service. Visitation was held from 10:00 a.m. until the time of the service on Saturday at Rendleman and Hileman Funeral Home. Graveside committal services for Faye were held at 2:30 p.m., Saturday, July 31 at Mt. Vernon Memorial Gardens in Woodlawn, where she was laid to rest next to her husband.
Memorial contributions can be made to the Missionary Fund at the First Christian Church of Anna.