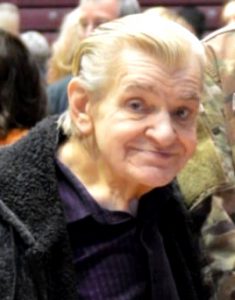 On Friday, June 11, George C. Walczak’s story ended, but he leaves behind his wife of 55 years, Donna J. Walczak, and his grandchildren, Donna M. Walczak, Danny Walczak, and Dustin Williams to continue telling his stories.
His story started on March 4, 1946 in Chicago. He went to Thomas Kelly High School where he met the love of his life, Donna, and he swore it was love at first sight. After two failed attempts at a proposal, George said that Donna finally let him catch her, and on September 10, 1966 they were married.
In October, 1964 George enlisted in the United States Army, and fought in the Vietnam War. He was a member of the 101st Screaming Eagles. When he came home however, he came home to a nation that insulted and scorned him for what he had done, a wound that never quite healed.
George was many things – a veteran, an electrician, a warehouse worker, a scuba instructor – but most of all he was an adventurer.
He dove Lake Michigan, Florida Keys, Cozumel, and several other places in North America (in search of mermaids, he said), swam with sharks and through sunken wreckage, climbed the Mayan temple in Cozumel, explored Mexico and plundered unsuspecting hotel’s aloe vera to treat a terrible sunburn his daughter got. He went to Renaissance fairs, swam with manatees, sought out old light houses and even older cemeteries, and never met a fight he could just walk away from.
He raised two children, and then three grandchildren with this same thirst for adventure. He taught them kindness where he had not been shown it, and courage that they might stand up for others.
He is preceded in death by his beloved daughter, Elizabeth Ann Walczak; his older brother, Edward Walczak; his father, Walter Walczak; and his step father, Walter Beach.
It hurts that he’s no longer with us, but George would not want us to mourn him forever, but celebrate his life. A part of us goes with him, but his stories are ours to keep.

Tell me a story, a child demands.
Of magic and monsters, and far away lands.
Well, said a man with a kind, open smile.
There once was a world I’ve not seen in a while.
Where the plants were all vibrant red, yellow, and pink.
Where the creatures were small, but some were giants I think.
Where they’d fly up above me, and some down below.
And if you traveled too deep, they might even glow.
There I wandered with monsters with dozens of teeth.
And cavorted with angels that hid in the reef.

Please tell me a story, a little girl asks.
Of heroes and villains, and quests full of tasks.
I’ll tell you a story, the man said with such pain.
I was once sent to battle for what my country had to gain.
Where heroes and men were both one and the same.
We fought and we gave, and were regarded with shame.
Where I met two men I’d come to call brothers.
Where I went in one man, and I came out another.

Tell me a story, one of love and romance.
Of fairy tales, princesses, and ends in a dance.
The man regarded his wife with great love in his heart.
I’ll tell you a story, but where do I start?
Once upon a time, a long time ago.
In a magical kingdom, we’ll call Chicago.
There was once a girl I fell for, love at first glance.
I’d have given her the world, if given the chance.
And there was a wicked witch, and a kindly old king.
And after many hard quests, a dance and a ring.

Oh, tell me a story full of adventure and daring.
Of far off lands and their people, and quest meant for sharing.
The man laughed and nodded, and remembered his youth.
I’ll tell you a tale, and I swear it’s the truth.
There were towering plants, and a princess they healed.
And gigantic sea monsters from the ocean I reeled.
There were mermaids and dragons, and ruins we’d climb.
And each quest ending in a banquet with food just sublime.

Tell me a story, an old man requests of a young woman.
You write so often, you must have a lot to tell then.
The woman smiled and said in kind.
I’ve borrowed most of them, I hope you don’t mind.
There once was a hero, who was just a man.
Who lived with an evil witch, and one day he ran.
And became a brave knight, who fought in a war.
And married a princess, but wait there is more.
They went on many adventures, and discovered new realms.
They stole and lied like pirates, charting courses at the helms.
They played with monsters who swam in the sea.
And gave birth to a princess, who eventually had me.
I tell you there was a man, a real person, no lie.
Who wrote a million stories, and then disappeared like a spy.
And I hear he lives in the country, as most retired spies do.
And he tells his granddaughter stories, and he swears they’re all true.
Do you know what his name was; do you know what he saw?
The man of a thousand adventures. Tell me a story Pa.