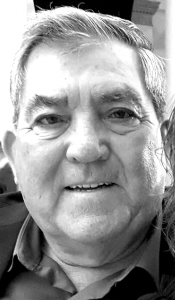 Paul Theodore “Ted” Switzer Sr., 80, of Cave in Rock, peacefully passed away on Monday, December 28, 2020 after a short illness.
Ted is survived by his wife of 53 years, Carol Ann (Bochenek) Switzer; his two children, Susan Marie Switzer of Palos Heights, IL and Paul Theodore (Amy) Switzer Jr. of Tinley Park, IL; and his beloved grandchildren, Nicole, Betsy, and Jack. Ted is also survived by his brother, William Dee (Laura) Jr. Switzer of Mount Vernon, IL as well as numerous nieces and nephews.
Ted was also a cherished member of the Bochenek family of the Hegewisch Neighborhood in Chicago, IL. Ted made an indelible mark on his family and the friends he made throughout his life.
Ted was born on February 21, 1940 to William Dee Sr. and Helen Switzer in Cave in Rock. After graduating from Cave in Rock High School in 1958, Ted enlisted in the United States Navy and served until 1962. After completing his tenure in the Navy, Ted moved to suburban Chicago and worked in various construction jobs until becoming a union cement finisher. Ted retired in 2000 after 30 years of working as a cement mason in the Chicagoland area and moved back to his roots in Cave in Rock.
Ted was the consummate provider for his family and gave them his unconditional love throughout his life. Ted was constantly on the go and a tinkerer even in the later years of his life. He was a wonderful partner to his wife Carol while splitting his retirement years in Cave in Rock and Palos Heights, IL. Ted’s granddaughter Nicole (Susan) lived with him in Cave in Rock while attending Southeastern Illinois College becoming a RN in 2011. She was truly the light of his life.
Ted was an avid outdoorsman enjoying deer and turkey hunting and bass fishing with his son. The whitetail deer in Hardin County can rest easier now that Ted will no longer be pursuing them. Ted and his brother Bill were quite the deer hunting duo back in their younger years. Ted loved fishing for catfish on the Ohio River and bass fishing on various Hardin County farm ponds and on Newton Lake. Ted was deadly with a black and blue fleck Senko and a white spinnerbait!
Ted also loved Nascar and cheered on Jeff Gordon along with his son, Ted Jr. Ted attended a number of races over the years along with his daughter Susan and son Ted. Some of their fondest memories were spending a day at the race, tailgating, and rooting for the #24 car. Ted did not hold it against his daughter that she was a Dale Jr. fan.
During Ted’s retirement years in Cave in Rock, he was an active member of the American Legion and cared for veteran cemeteries. Ted loved his friends in Cave in Rock and greatly enjoyed being a part of the community.
He cherished drinking coffee, eating dessert, and talking about all the important news of the day with his friends in Cave in Rock. The loss of Ted will be felt by many.
There will be no visitation at this time with a burial at Cave in Rock Cemetery in the future.