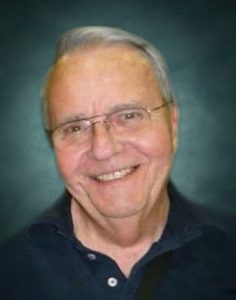 Terrell Henry Douglas, 78, of Newburgh, IN, sat at Jesus’ feet on Tuesday, December 22, 2020. He was born on September 11, 1942 in Rosiclare, IL to the late Ulys (Pat) Douglas and Marie (Henry) Douglas. He was proceeded in death by his brother, John Jefferson Douglas, and son, Christopher Terrell Douglas.
He is survived by the light of his life, Janet Brazier Douglas; brother, David Patrick Douglas (Susan) of Sycamore, IL; daughters, Penny (Matthew) Kaluza of Newburgh, IN and Heather (Chris) Groves of Avon, IN. He leaves a legacy for his fun-loving grandchildren, Aaron and Jordan Kaluza, and Shelby, Madison, and Emma Groves.
Terrell graduated from Cave-In-Rock High School in 1961. He had a deep love for God, his country, and his family. He served in the US Air Force from 1961 to 1964. He was proud to be a veteran and hated that his birthday became such a sad day in history.
He loved NASCAR, the St. Louis Cardinals, and always had his camera with him. During retirement, he and his wife would snowbird at Okaloosa Island, FL. After 55 years of marriage, he never once said a “cross word” to his wife, instead he would put his hands in his pockets and patiently walk away. He raised two daughters who both love Jesus and he loved his five grandchildren more than anything on earth and the feelings were mutual.
Above all, his faith and leadership at First Christian Church of Newburgh were what defined him as a committed follower of Christ. He started attending FCCN in 1992 serving as an elder for many years. He was an active voice in the building of the new facility at Lincoln and Hwy 261. There is no doubt that he was welcomed into arms of Jesus.
There will be no visitation at the funeral home, but a time of celebrating will be held at the gravesite at Empire Cemetery in Elizabethtown, IL with Joe Schitter, longtime family friend, sharing in a life well lived.
Memorial contributions can be made to: First Christian Church Building Fund, 4544 SR 261, Newburgh, IN 47630. Condolences may be made online at www.AlexanderNewburghChapel.com.