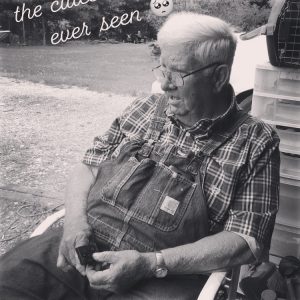 Larry Bruce Gustin, 79, of Elizabethtown, IL passed away Wednesday, December 2, 2020 at St. Vincent’s Hospital in Evansville, IN.
Larry was born at home in the Peters Creek community to Cleta Marie Gustin and George Cronkite on October 17, 1941.
He married Joyce Lloyd on December 17, 1966 and this union brought forth two children, Tracie (Dusty) Stanford and Trent Bruce Gustin both of Elizabethtown, IL.
The lights of Larry’s life were his grandchildren, Brody Bruce Gustin and Krista Hope Stanford. He was extremely proud of his grandkids and loved them more than anything.
Larry worked in the mines most of his life and retired from Peabody Coal. He has also been a surveyor for Minerva/Allied Chemical in Hardin County.
He also enjoyed auctions and could usually be found at the back waiting on the junk boxes. Most mornings he could be found having breakfast with his friends at Lucy’s Place telling tales about what he bought at the auctions or bragging on the grandkids.
Larry was preceded in death by his wife of 49 years, Joyce. He was loved by all and will be missed terribly.
Private services will be held at a later date. Hardin County Funeral Service in Rosiclare is in charge of the arrangements.