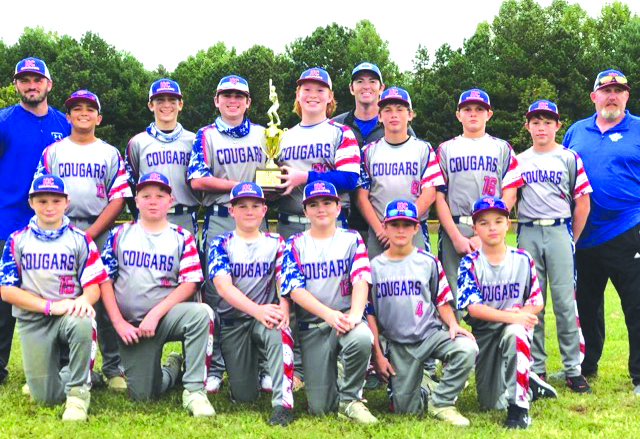 On Thursday, October 1, 2020 the Hardin County Jr. High Cougars baseball team faced the Vienna Rams in a game that would decide who would advance to the Regional Championships to be held the following Saturday.
Both teams were strong on the pitcher’s mound Thursday, but the Cougars defeated the Rams with a score of 3 – 1. The Hardin County pitchers allowed just six hits to Vienna.
The Vienna Rams fired up the offense in the first inning when Brandon Dutton threw a wild pitch, allowing on run across the plate for the Rams. Despite this error, Dutton earned the victory on the hill for the Cougars. He lasted six innings, allowing six hits and one run, while striking out nine and walking zero.
Landon Fricker threw an inning in relief out of the bullpen. Fricker recorded the last three outs to earn the save for the junior high Cougars.
Jackson Etheridge took the loss for the Vienna Rams. Jackson lasted six innings, allowing four hits and two runs. He struck out ten.
The Cougars tallied five hits in the game. Landon Fricker and Bryden Banks each managed multiple hits for the Cougars. Each player collected two hits to lead Hardin County.
The big blow for Hardin County came in the top of the sixth inning. The Cougars were down 1-0. Drew Vaughn’s blast to right center plated 2 Cougar runs, giving them the lead they would not surrender. They earned the win that advanced them to the Regional tournament.

Landon Fricker was brilliant on the mound Saturday, October 3, 2020, as he threw a no-hitter to lead the Hardin County Jr. High Cougars past the Crab Orchard Trojans with a score of 10 – 0 winning the Class M Regional Championship.
The Hardin County Cougars got things moving in the first inning when Brandon Dutton singled on the first pitch of the at bat, scoring one run.
Fricker was the winning pitcher for Hardin County. He surrendered zero runs on zero hits over five innings, striking out seven.
Hayden Troxel took the loss for the Crab Orchard Trojans. He allowed five hits and six runs over three innings, striking out three and walking one.
The Cougars racked up eight hits in the game. Brandon Dutton, Bryden Banks, and Landon Fricker all had multiple hits for the Cougars. Fricker, Banks and Dutton each collected two hits to lead the Cougars.
This win advanced the Cougars to the first round of the State competition which will be held on Wednesday, October 7 at 3 p.m. on home soil (Tammy Conn Field) at the school.
After the game the team was escorted through Rosiclare and Elizabethtown by local fire departments to celebrate their victory with the community.
Coach Matt Cullum said the team has had a fantastic season with a record of 11-1 and also earned the title of GEC Champs.
“Due to Covid we are able to host this first round game at Hardin County High School,” said Cullum. “We would love to see you guys come support this great group of boys. The concession stand will be serving grilled pork chop sandwiches and hot dogs. Can’t wait to see all the Cougar fans!”