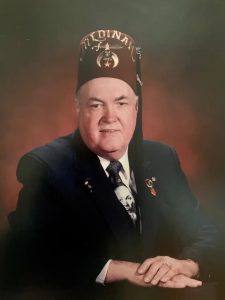 Claude Vernon Vaughn, 81, of Elizabethtown, IL, died Sunday, September 27, 2020 at his home. He was a 32nd Degree Mason at Masonic Lodge Number 636 in Manteno, IL; member of Medinah Shriner’s Temple and was a United States Army Veteran.
Survivors include his brother, Larry (Peggy) Vaughn of Elizabethtown, IL; nephews, Larry Vaughn, Jr. of Manteno, IL and Christopher Vaughn of Minooka, IL; niece, Michelle Vaughn of Manteno, IL; and great -nephew, Kaidan Vaughn of Minooka, IL,
He was preceded in death by his parents, John and Esther Vaughn.
Masonic Rites will be given at Hardin County Funeral Service on Thursday, October 1, 2020 with funeral services to follow at 11 a.m. Interment will be in Cave Hill Cemetery.