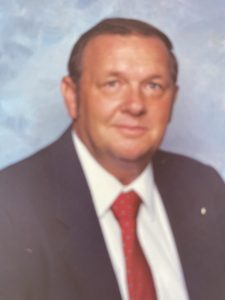 Bradley Otho Williams, 79, passed away Thursday, September 17, 2020 at his home in Golconda, Illinois. Brad was born May 13, 1941 to Wayne and Virginia (Ralph) Williams in Rosiclare. He attended Rosiclare High School (Class of 1958) until leaving to work for his uncle in Chicago.
In Chicago, Brad met his beautiful wife of 56 years, Eileen Sandra Peters. Shortly after marrying, they relocated to Elizabethtown and he began his career as a heavy equipment operator. He was a member of the International Union of Operating Engineers for 54 years.
Brad was an avid outdoorsman. He spent his weekends hunting, fishing, and boating. He loved to read Louis L’amour novels and was a huge fan of Western movies. Brad enjoyed a good joke and was a big kid at heart. He could often be found playing with and entertaining his kids, nephews, and their friends at family gatherings. In his later years, he has enjoyed the constant companionship of two loving dogs, Josie and Jed.
Brad was preceded in death by his parents and his sister, Benita (Hansel) Cook.
He is survived by his wife, Sandy, and their two children, Jennifer (Ken) Anderson of Bloomington, IL and Barry Williams of Golconda; five grandchildren, Brock Williams, Blayke Williams, Nicholas Anderson, Samuel Anderson, and Nolan Anderson; four great-grandchildren; and his faithful dog, Jed.
There will be no services due to COVID-19. A celebration of life party will be held at a later date for family and close friends.
Memorial contributions can be made to the Alzheimer’s Association at alz.org.
Visit alyfh.com to leave an online condolence.