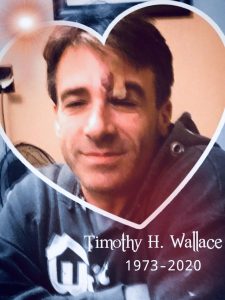 Timothy Hal Wallace age 47, born March 21, 1973 in Eldorado, IL passed away Monday, June 22, 2020 at his home in Rosiclare, IL. Tim was also a former resident of Cambria, IL.
Tim (Timmy) was born to Bill Wallace of Rosiclare, IL and Barbara Love Kessler of Colp, IL. He was preceded in death by his mother Barbara; grandparents, Thurman and Veldene Love, and Ken and Blythe Wallace; uncle, Steve Alvey; and nephew, Trevor.
Tim leaves behind his father and stepmother, Bill and Debbie Wallace; brother, Tom Wallace of Cambria, IL; sister, Chloe Davis of Georgetown, KY; nieces, Kaylee, Taylor and Addie Wallace and Ariel Flowers; one stepbrother and sister; three great-nieces; one great-nephew; stepfather, Kenny Kessler of Colp, IL; eight step-brothers and step-sisters; aunt and uncles, Larry and Regina Hall, Greg and Angie Love, Kevin and Brenda Murphy, Judy Alvey and Ken Wallace; many cousins; and one biological son, Dustin. Tim also leaves behind his estranged wife, Jini Gilbertson; five step-children; and seven grandchildren. Lastly, he leaves behind his girlfriend, Angela Atkinson; three step-children; and seven grandsons, for a total of fourteen grandchildren who adore him. He leaves behind many friends and two beloved pets “Charlie” and “ShittyKitty”.
Tim aka—-Mr. Tim—-Mr. T—Bigdaddy—or T.Z. loved life and was always smiling! He loved helping others, making people laugh, music, his many friends and dog Charlie. He was happy and full of life and was looking forward to his future he had planned. Tim touched so many people’s lives in such positive ways. Everyone who knew Tim loved and adored him, as he did them.
You will forever be in our hearts and until we see you again we will love and miss you.
Love: Angie, Charlie and your family.
A private Celebration of Life service is being held at a later date.