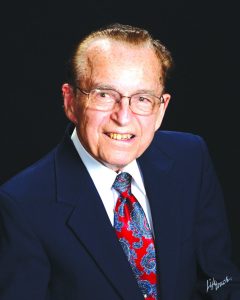 Bernard R. “Bernie” Volkert, 96 of Elgin, passed away on April 26, 2020, in Elgin, Illinois. Bernie was born February 6, 1924 in Rosiclare, Illinois, the son of Charles F. and Mary Agnes (Forwe) Volkert.
He was a veteran of the United States Army, serving in the 10th Mountain Division during World War II. Bernie was a member of a platoon who did their part in the liberation of Risiera di San Sabba, a concentration camp in Trieste, Italy in 1945.
After returning from service to his country, Bernie married his sweetheart and lifelong love Elva Lea Shadowens on June 5, 1950. The pair resided in Rosiclare, Illinois, where Bernie worked in the payroll department for Alcoa Mining Company.
In 1958 Bernie and his wife moved their growing family to Elgin, where Bernie began work at Revcor, Inc, serving in the payroll/human resources department for more than 56 years until retirement at age 92.
Bernie was a 62-year member of St. Mary’s Catholic Church in Elgin, where he served as a church usher and member of the finance committee for many years. He was a member of the American Legion Post 57 of Elgin and the VFW Watch City Post 1307 of Elgin.
Loved ones will remember Bernie for his kindness, contagious smile, love for all matters, ice cream, bluegrass and country music.
He was the consummate Bluegrass entertainer with his guitar, harmonica and singing voice. He was a member of the Northern Illinois Bluegrass Association. Bernie and Elva would travel throughout the northern Illinois region, as Bernie would sit in on various “Jam” sessions with fellow Bluegrass Music enthusiasts. Even at age 96, Bernie continued to delight his fellow residents of the Sheridan at Tyler Creek Elgin assisted living community by playing his guitar and harmonica during social gatherings. Not a family celebration or Christmas dinner would be complete, if “Grandpa” did not play his guitar and harmonica to the delight of all family present.
Bernie is survived by his wife, of nearly 70 years, Elva; two daughters, Lucy (Fred) Missele and Angela (Robert) Allanson; brother, Laurence Volkert; sister, Virginia Rose (Walt) Angermeier; six grandchildren, Jill (Bill) Jaramski, Joy (Jim) McCarron, Jennifer (T.J.) Moore, Jeannine (Terry) McCarron, Crystal (Michael) Paunan, and Robert (Kristen) Allanson; and 13 great-grandchildren, Mikayla Horn, Madison McCarron, Meara McCarron, Reilly Moore, Owen Moore, Sienna Jaramski, Sage Jaramski, Enya McCarron, Piper Moore, Lily Paunan, Penny Paunan, Maddy Paunan, and Michael Allanson.
He was preceded in death by his parents and three brothers, Omer, Adolph and Mark Volkert.
In accordance with COVID-19 social restrictions, private family Mass of Christian Burial will be held on Tuesday, May 5, 2020 at St. Mary’s Catholic Church Elgin followed by burial at Mt. Hope Cemetery Elgin.
In lieu of flowers, memorials may be made to St. Mary’s Catholic School, 103 S. Gifford Street, Elgin IL 60120.
Funeral arrangements entrusted to the Symonds-Madison Funeral Home, 305 Park St. Elgin IL 60120. For more information call 847-741-1128 or visitwww.symondsmadison.com.