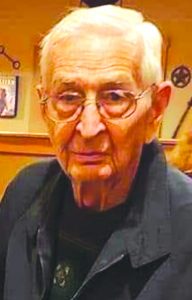 Earl Davis, Jr., 89, of New London, IA, died Wednesday, February 26, 2020 at Henry County Health Center, Mt. Pleasant. Earl was born January 2, 1931 in Elizabethtown, Illinois, the son of Earl Sr. and Stella Marie Fricker Davis.
He married Marilyn Lee Garmoe on January 4, 1951 at Faith Lutheran Church in Mt. Pleasant. She died February 7, 2019. He served in the Army in Stuttgart, Germany during the Korean War. He was a long time member of the New London United Methodist Church. For 30 years, Earl was a welder and member of the UAW at J. I. Case. On his days off and weekends he would also weld for Don Ruschill in New London.
Earl enjoyed riding his motorcycle and bicycle, and had walked every street and sidewalk in New London thousands of times. He enjoyed outdoor work. He was a deeply devoted family man and loved spending time with his grandchildren and great-grandbabies.
Earl is survived by three daughters, Deb (Dave) Kempker of New London, Barb (Paul) Miller of Mt. Union, and Karen (Cory) Ogier of Sierra Vista, Arizona; one son, Jeff (Berdette) Davis of Mt. Pleasant; fourteen grandchildren, thirty great-grandchildren; and several nieces, nephews, and cousins.
He was preceded in death by his parents, wife, and one brother Gordon.
According to his wishes his body has been cremated and formal services will be held at a later date at Elliott Chapel, New London. Inurnment will be held in Burge Cemetery. Memorials have been established to the New London United Methodist Church and New London Fire and Rescue.
Online condolences may be left at www.elliottfuneralchapel.com