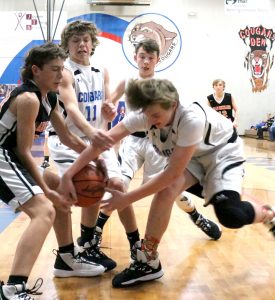 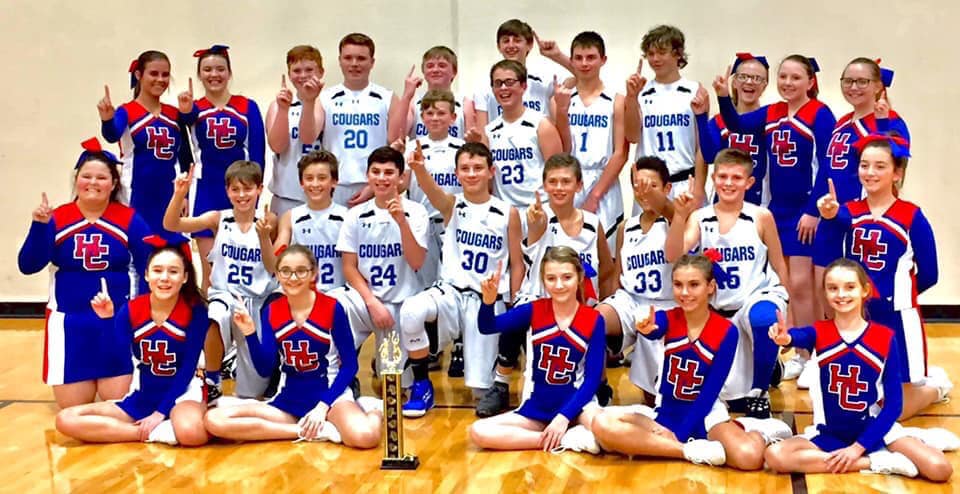 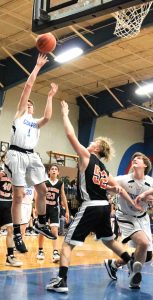 The Hardin County Junior High Boys Basketball team has had a great season under the direction of Brett Oxford this year. So far this season the team has accumulated 19 wins. They’ve had only two losses this season where one game they played hard and had a ‘good loss’ as Coach Oxford described it, and another game where they didn’t play the best, and had some bad breaks.
They won the first round of the GEC tournament last Thursday night with a score of 70 – 10 against Thompsonville. Tuesday night they played in the second GEC round against Crab Orchard at Gallatin County School and won with a score of 55-26. The team advanced to the GEC championship game that will be played Thursday, January 23, 7:30 p.m. against Galatia at Gallatin County School.
Coach Oxford shared this message on Facebook after the game Tuesday night: “I’ve got a huge favor to ask everyone. Thursday we play Galatia for the Little GEC championship at Gallatin County. It’s been several years since we’ve won this. These kids have worked their butts off for months. They are 19 and 2 and are quite possibly one of the best jr. high teams to ever go through Hardin County. I’m asking you…actually I’m begging you to come to Gallatin County Thursday and support these boys. They deserve it.”
Coach Oxford said his guys play hard! They box out and out-rebound their opponents. He said, “They hustle like no other team I’ve ever had. This is by far one of the most unselfish group of kids I’ve had. They don’t care who scores, just as long as we do.”
Coach Oxford spoke highly of his entire team and described his key players –
“Levi Snyder is our big guy who gets a ton of rebounds and scores at will. He has had several Double Doubles this year.
Morgan Fricker is another one who scores a lot. He’s probably our best shooter and he’s very safe when handling the ball. Walker Bebout has the toughest job. He is our point guard and is responsible for taking care of the ball and making things happen.
Nick Austin is a rebounding machine and is almost guaranteed to score 8 or 10 points per game.
Aiden Borum is one of my favorite kids to watch. He played like I did. He’s a hustler. He might not score 20 points a game, but he’s just as important as anyone else out there. He’s going to rebound, take charges and play great defense.
Trafton Stallings and Zac Watson come in when we get into foul trouble. They know their jobs and do them well.”

This week the Cougars finish up the GEC Tournament. Next week, Hardin County School will host the SIJHSAA Regionals. See the JH REgionals bracket below. Go Cougars! 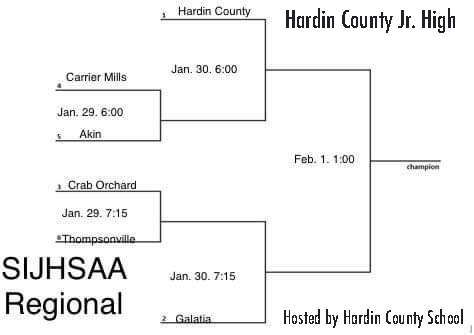 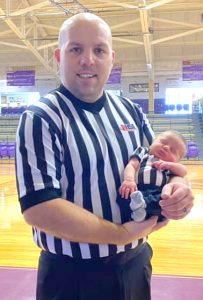 Too cute not to add! In his spare time Coach Oxford serves as the ref for some Southern Illinois games. He is pictured with the newest edition of his “HOME” team, born to he and his wife Lizzy, January 10, 2020 Maddux Chip “Chipper” Oxford.