Around 2014, John and Ramona Douglas of Cave In Rock thought of an idea to beautify their town while bringing awareness to different types of diseases or cancers. Painted bicycle displays are now all over Cave In Rock. Each bicycle is painted with a different color to represent one or more diseases. When the idea first began, there were only five bicycles, but now there are 19 and soon to be 20. The Douglas’ have purchased most of the bikes at yard sales while traveling.
Winnie and Jerry Oxford volunteer to take on the responsibility for the care and upkeep of the bicycles. Each bicycle is a part of decorative displays usually complimented with flowers throughout Cave In Rock. Each year they get the bikes out and repaint if needed. This year they plan to paint a new bike – the 20th one – white, in honor of those who have battled lung cancer.
In addition to making and maintaining the bicycle displays, the Oxfords start very early each morning and water plants and flowers throughout the town. Then they go back out at night and water the ones that require a little more water. On a typical day, the watering process can take 3 – 4 hours total. They also feed the plants, do trimmings, and pick the dead heads off to enhance the look of the plants.
The Oxfords are glad to serve the community and they feel God has blessed them with the health to get out and make the town look nice. They are glad to partner with the Douglases on an ongoing project that beautifies Cave In Rock.
When you are in Cave In Rock for Frontier Days this weekend, be sure and enjoy the views and details of the quaint little village of Cave In Rock.
The pictures in the story are courtesy of Darlene Hobbs. A story similar to this was printed in 2014. 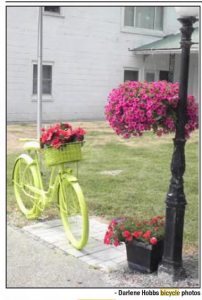