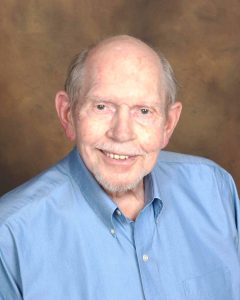 John D. Blakely, 82, of Cincinnati, Ohio, died Sunday, August 25, 2019 after a brief stay in Alois Alzheimer’s Center. John David Blakely was born July 26, 1937 in Altamont, Illinois to Forrest Blakely and Ruth (Walker) Blakely.
He attended Southern Illinois University, graduating with a BA in Business and Marketing. At SIU, he met and married Judith Anderson of Elizabethtown, Illinois. They married April 28, 1962 and had two children, Karen and Mark.
Judy was the daughter of Ollie and Nancy Anderson of Elizabethtown. John enjoyed visiting her family in E-town. For many years, John and Judy would join her brothers, Fred, Dick, and Don, and the extended family would camp in the Midwest and have an “Anderson Get Together.” The Anderson boys were as much his brothers as his own brother, Charles.
John and Judy lived in Edwardsville while he worked at Hunter Packing in E. St. Louis. In 1973 they moved to Cincinnati, Ohio where he worked at Partridge Meats. He retired from Kahn’s/Hillshire Farms in 1999.
After retirement he and Judy spent time traveling and camping. He played in several pool leagues. In the late 70s he took pottery lessons and became a very good potter. He loved sports and played basketball and softball into his 40s. Music was an important part of his life. He was funny and kind, loved his family, and enjoyed his many friends.
John is survived by his wife of 57 years, Judy, of Cincinnati, his daughter, Karen Albright (Lee) of Fort Wayne, IN, his son, Mark, of Cincinnati, his grandchildren Clark Albright (Kate) of Richmond, VA, Audrey Albright of Chicago, and Madeline Albright of Fort Wayne. His parents, brother, and brothers-in-law all preceded him in death.
A memorial will be held October 13 at noon at Forest Park Senior Center in Cincinnati. Preferred memorials to Alzheimer’s Foundation of America (alzfdn.org) or American Lung Foundation (lung.org). Arrangements are through Advantage Cremation Care of Greater Cincinnati.