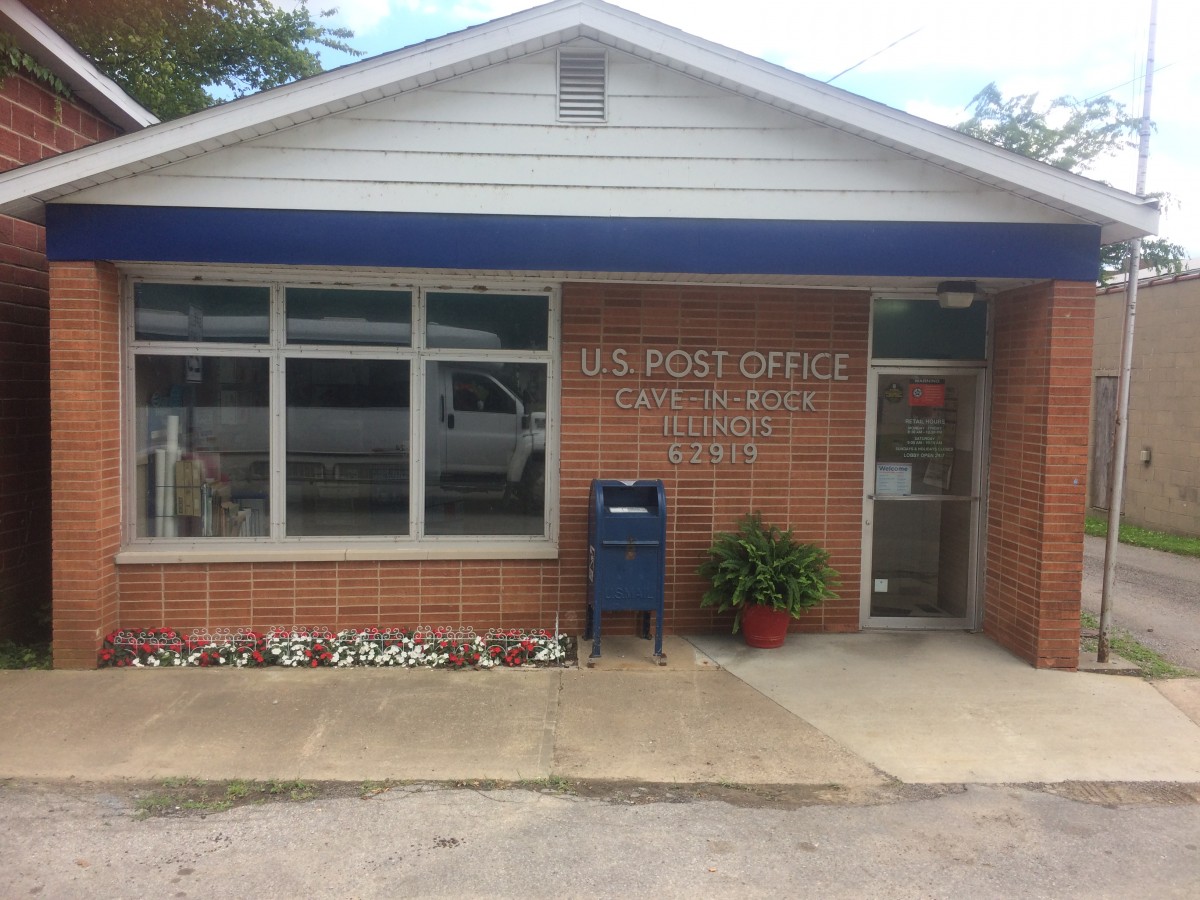 The village of Cave In Rock, will celebrate Zip Code day on Saturday, June 29. Zip Code day happens once a century when the date, such as 6-29-19 matches the zip code.
Residents of Cave In Rock, past and present are invited to visit the post office on Main Street from 9 a.m. to 10:15 a.m. to commemorate the day.
Pens and small flags will be given out to all customers who visit the office. Staff will serve light refreshments.
Cave In Rock (previously known on maps and in literature as Rock Haven, Rock Cave, Rock and Cave, Rock in Cave, Big Cave, Ford’s Ferry, and Robbins Ferry), is now located in Hardin County on the north bank of the Ohio River in southeastern Illinois. A lot of local history is associated with the village, mainly revolving around the cave from which the town got its name.
In 1814, Lewis Barker bought the section of land where Cave In Rock is located. He planned to build a new road to connect with Barker’s Ferry and the Kaskaskia Road. This road, which ran through Crittenden and Hardin Counties, Kentucky, would become Ford’s Ferry Road. In its early days, it was the main road across this section of the country for settlers travelling from the Kentucky.
A plat map of Cave In Rock was recorded in 1839, but the village was not incorporated until 1901. Early records often refer to the town as Rock and Cave, however on October 24, 1849, the post office changed the name to Cave In Rock. The village was in Pope County until 1839, when it became part of Hardin County, which was created from the counties of Pope and Gallatin.
Until the late 1870s, the main street of Cave In Rock was Water Street, which ran in front of the businesses facing the Ohio River. However, when the town burned, the businesses were rebuilt facing away from the river, and Water Street became Main Street, where the post office is still located. Mail was delivered six times a week by packet boat as late as 1903.

Today, Cave In Rock is a quaint town, continually decorated and kept neat by local volunteers. The town overlooks the Ohio River and connects travelers to Kentucky with the Cave In Rock Ferry. Tourists enjoy this free ride, which leads them to visit Amish country on the Kentucky side or to see the main attraction – the cave – in the Cave In Rock State Park on the Illinois side. The park is also great for camping, picnicking, bike riding, and hiking. Visitors often enjoying the two restaurants in town.

The ZIP Code through history –
Before there was the ZIP code there were postal zones or postal districts. These were also numbers that helped mail carriers figure out where pieces of mail needed to go. They started in large European cities, like London.
By the early 1920s they’d spread around the world, including to the US. Most major cities were using some form of postal code by the end of World War II.
Around that same time the idea of a Zone Improvement Project (ZIP) code was introduced in the US.
The ZIP plus two-letter state abbreviations was the brainchild of Henry Bentley Hahn, Sr., a postal inspector.
And it was J. Edward Day, Postmaster General who made it a reality.
The Post Office Department announced the new ZIP code in late 1962. It rolled out a publicity campaign featuring Mr. Zip to encourage everyone to actually use the new codes. Among other efforts, the campaign mailed more than 72,000,000 postcards letting people know about their new ZIP code.
Mr. Zip was originally designed for a Chase Manhattan Bank campaign in the 1950s. AT&T later acquired the design and let the Post Office use him (with a few modifications) for its campaign.
In fact, it was also officials at AT&T who convinced the Post Office it needed a publicity campaign. The company had faced resistance when it tried introducing telephone area codes and thought the Post Office might have similar problems with the ZIP.
Using the ZIP code was not mandatory, but the Post Office strongly encouraged it. In 1967 the Post Office did make it mandatory for bulk mailers.
Today using the ZIP code is pretty much automatic. Even the ZIP+4 numbers introduced in 1984 to further narrow down locations.