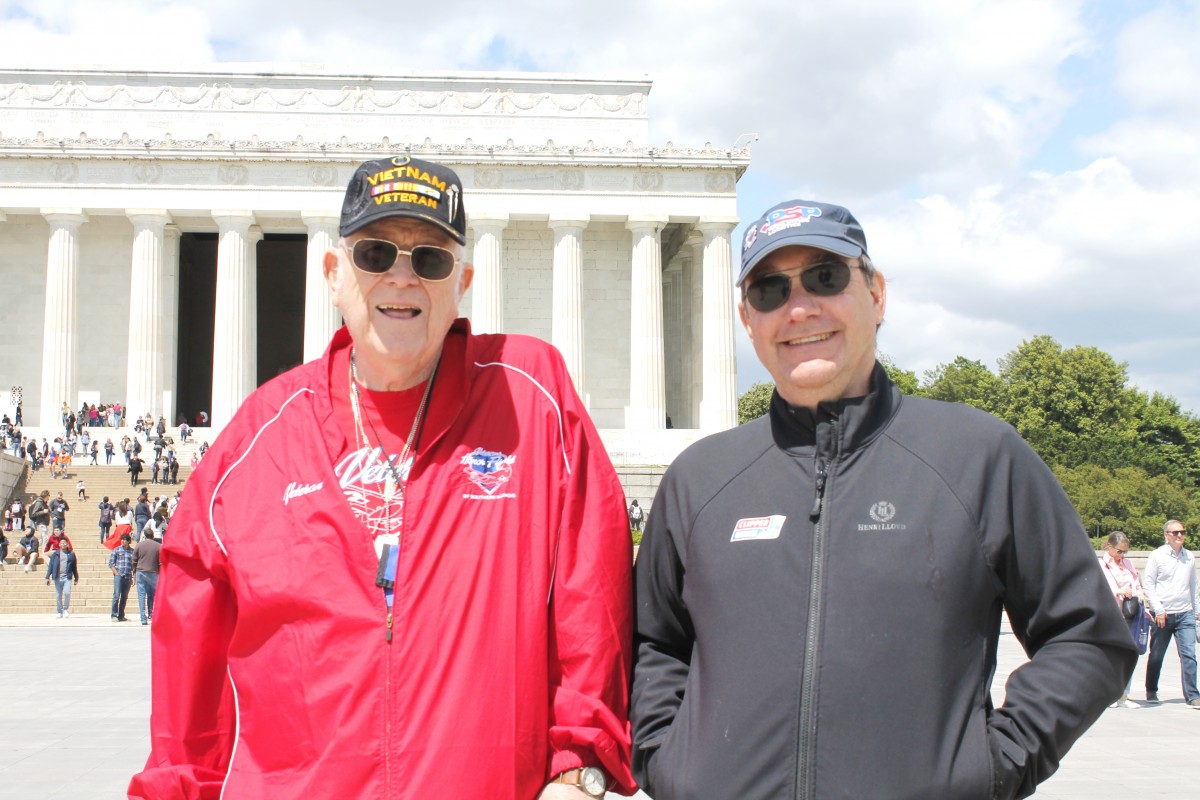 Eighty-four year old veteran, veteran’s advocate, and Elizabethtown native, Howard D. Bateman, recently had the privilege to travel with a group of war veterans to Washington, D.C. with Honor Flight of Southern Illinois. It is the fifth flight from Southern Illinois since it began. Veterans take an all expense paid one-day trip to Washington, D.C. to visit the National WWII Memorial and Korean War Memorial. Additional stops at other monuments and memorials may also be included. Veterans Honor Flight of Southern Illinois covers airfare, bus fare, entry fees, food, and supplies. Each veteran is assigned a guardian to ensure safety and so all of his or her needs are met. In order to qualify for the trip, veterans have to apply and then are notified if selected. The trip is funded by donors like Mary Nell Chew who funded Flight #5 with a gift of $85,000.

“Veterans need to contact these people,” said Bateman. “Marion…they carried you all the way!”

Bateman’s guardian, Mark Pearson from Carlisle, IL, took good care of him and was with him every step of the way. Pearson continually asked him if he needed a wheelchair, with Bateman’s reply, “No, I don’t want a wheelchair!” Bateman explained that he was in a wheelchair for two years due to an infection in his knee after a replacement and said that he’d had all of it that he needed. Pearson also wouldn’t let Bateman buy anything that day, including a souvenir he wanted to get for his wife. Bateman said he was well taken care of during the trip. The group was escorted by police throughout the entire trip. He also received several additional items, including a Vietnam cap, Honor Flight t-shirt and Honor Flight jacket.

Bateman did know a few others on the flight. He saw Ed Patton who is also a former resident of Elizabethtown. He also knew Norman Jones from Vienna aboard the flight. Bateman thought it was significant that three World War II veterans were on the flight.

At the age of 21, just three months after he married his wife Janet, Bateman joined the United States Air Force. In June of this year the Batemans will have been married 62 years! He volunteered himself to the Air Force, because he didn’t want to be drafted into the Army. He served for 21 years, 1 month, and 23 days before he experienced retirement at the rank of Master Sergeant. He said enrolling in the Air Force was the best thing he ever did, though his back, neck, and knees have paid for it. In the service Bateman worked in POL (Petroleum Oils and Lubricants). His department received, stored, issued, and performed quality control on all of the fuel on the base. Then in 1975, he cross-trained in the Air Force Ground Safety Program. There, the goal was to keep soldiers from getting hurt or killed. If there was a death, an investigation on the case was made.

In 1957, just as Bateman began Basic Training, his wife wrote him a letter notifying him they were going to have a baby. Janet and every child that came along (four total) were able to live with him while he was stationed at different bases, the first full-time base being in Lincoln, Nebraska. When he went on the two remote assignments, they could not go. Those were the worst times for Bateman in the service, and even more difficult for his bride. Going on remotes meant that he would not see his wife and family for sometimes up to a year. Some of places he was assigned to were Thule, Greenland; Minot, North Dakota; and Ubon, Thailand.

With the soon arrival of his second child, Bateman took leave and came home to surprise his wife. Bateman’s first born son, Rick, knew him only by his picture. He wouldn’t have anything to do with him at all, at first. Finally the next night he had a change of heart and Bateman found that Rick didn’t want to leave his side. While home, he and Rick made a special trip to Hardin County where Bateman visited his mom and dad. He said he couldn’t come back and not visit his mom and dad.

Southeast Asia (Ubon) was where Bateman was hurt while serving. He was inside writing a letter to his dad, when he saw a blue haze on the runway. A F-4 Phantom blew a tire while taking off. There were several types of explosives aboard. To see what was going on, Bateman had climbed 90 feet high on his storage tanks just as flares rolled from the aircraft. It caused an explosion of flames 300 feet high. He came down from 90 feet, in what he explained, was three long jumps . As he took off running, shock waves of multiple bombs going off sent Bateman sailing 70 feet through the air and then onto blacktop. Shortly after, he ran over to check his tanks. Bateman thought he saw a tree branch but realized it was a Cobra raring up. It’s probably safe to say that the letter he sent to his dad must have been pretty exciting. He attributes his neck, back and knee problems to the intense impact on his body from that day’s events.

Bateman remembers how poorly he and other veterans were treated by so many during Vietnam. Some Americans showed opposition to the war, and veterans didn’t get the respect they do today. “When I came home in November of 1967, though we were told not to, I was traveling in my summer uniform. I had 10 years in the Air Force and I was proud of it,” said Bateman. “When I arrived at San Francisco, a hippie looked at me, called me a baby killer, and then spit on me.” To egg the hippie (and his untruth) on, Bateman told him, “Well, that’s all I could find to shoot at. I didn’t tell him I was in the Air Force and they didn’t give me a weapon.”

Bateman sees a change in people now though, especially after the first Iraq war. Bateman wears his Vietnam hat nearly everywhere he and Jan go. They travel often and some have given him free meals and respect after taking notice he served in Vietnam. Once, they were even offered free vacation housing. “It’s amazing to me how different I am treated, compared to the way it was in the 60s and 70s,” said Bateman.

Not only did the Honor Flight serve as a time to remember and reflect on his service to the country, but those supporting the event gave Bateman a level of respect and honor that he’d never felt before. “I started crying when we got to D.C., and I cried the whole day,” said Bateman. “We stepped off the plane in D.C. People were clapping their hands and cheering. I still have a hard time talking about it.” He said they were shaking veterans’ hands and saying, “Welcome home”. Also, to end the Honor Flight, there was an additional welcome ceremony in Marion, where all the veterans were announced as they walked through a roped-off path of supporters and thankful Americans. With tears in his eyes, Bateman said, “What I got yesterday was the welcome home I never got.”

In D.C., the group of Honor Flight veterans visited the WWII, Vietnam, Korean, Marine (Iwo Jima), Navy, and Air Force Memorials. They were stopped close by the Lincoln Memorial and the Disabled Veterans for Life Memorial, but they didn’t get to visit those. They also visited the Tomb of the Unknown Soldiers and watched the Changing of the Guard, which Bateman described as impressive. They also visited the Women’s Memorial in Arlington Cemetery. When they went to the Iwo Jima Memorial school children from Wisconsin were there. The welcoming and honor continued as Bateman received an envelope containing six letters from the school kids. The kids sincerely thanked the veterans and shook each of their hands.

As they were taking off for the flight back to Marion, Bateman was handed an envelope of letters to read from his wife, oldest son, youngest daughter, Rosemary Thornton, state legislators, and students. He read some letters from his family and friends and looks forward to finishing the rest in the days to come. He teared up remembering a few things from his son’s letter. Bateman said his son remembered the day he left for Southeast Asia and when he took him in his arms the day he came home. His son also added that he really enjoyed going to the football games in Carbondale for Veterans Appreciation Day.

Not only did Bateman serve our country one quarter of his life, he continues to actively support veterans today. In addition, he has inspired men in his family to serve the country. Bateman’s oldest son was in the Navy, his youngest was in the Marines, one grandson was in the Navy, and another one is an officer for the Coast Guard. The Illinois Department of Veterans Affairs named Bateman “Veteran of the Month” in November of 2009. He was named “Disabled Veteran of the Year” in 2011 and 2016. He has been the commander for the Disabled American Veterans chapter for 15 years.

To support disabled veterans like himself, Bateman continues to fight the VA on behalf of Air Force soldiers affected by Agent Orange. Bateman feels that since the VA has admitted that Agent Orange was used in Southeast Asia on the perimeter of his base, he will continue to argue the case until something is done about it.

Bateman continually supports veteran related activities, such as the Disabled Veterans night at Rent One Park, and looks forward to visiting the full size replica of the Vietnam Memorial Wall that had its grand opening in Perryville, MO last weekend. In order to better inform veterans, Bateman is trying to get the Illinois Department of Transportation to place a sign in Chester, IL where the road goes across the bridge over the Mississippi River into Missouri.

In an effort to honor veterans he meets along the way, Bateman offers brightly painted campaign ribbons (a small intricately painted turkey feather) designed by a Native American woman from North Carolina. He met her at a Red Earth Festival in Oklahoma City. She makes all different designs, including: POW/MIA, Purple Heart, Korean War, Iraqi Freedom, Afghanistan, etc. He stays in contact with her to purchase and hand out. Bateman recently purchased 150 Vietnam ribbons that he will hand out to veterans at a reunion he is attending this week in Florida. He will be visiting with fellow veterans who were assigned, over a ten year period, to the base he served at in Ubon, Thailand.

After retirement from the Air Force, Bateman was 42 and still young enough to keep working. He had a few different jobs, but then took long term employment with the Department of Defense, before fully retiring at the age of 61. Today, Bateman lives with his bride (as he likes to call her) in Belleville, Illinois. The Batemans still keep ties with several friends from Hardin County. He mentioned good friend and fellow veteran Larry Robertson along with his wife Patty, and also spoke of John and Corina Hall, and good friend Rosemary Thornton. He recently donated books to the Rosiclare Library. When he visited, someone asked , “Did you see anyone you knew?” He replied, “I saw several I know, but not a soul did I recognize.”

To apply as a veteran or guardian for Honor Flight of Southern Illinois, visit www.veteranshonorflight.org. There are also applications available at the Hardin County Independent in Elizabethtown, IL. 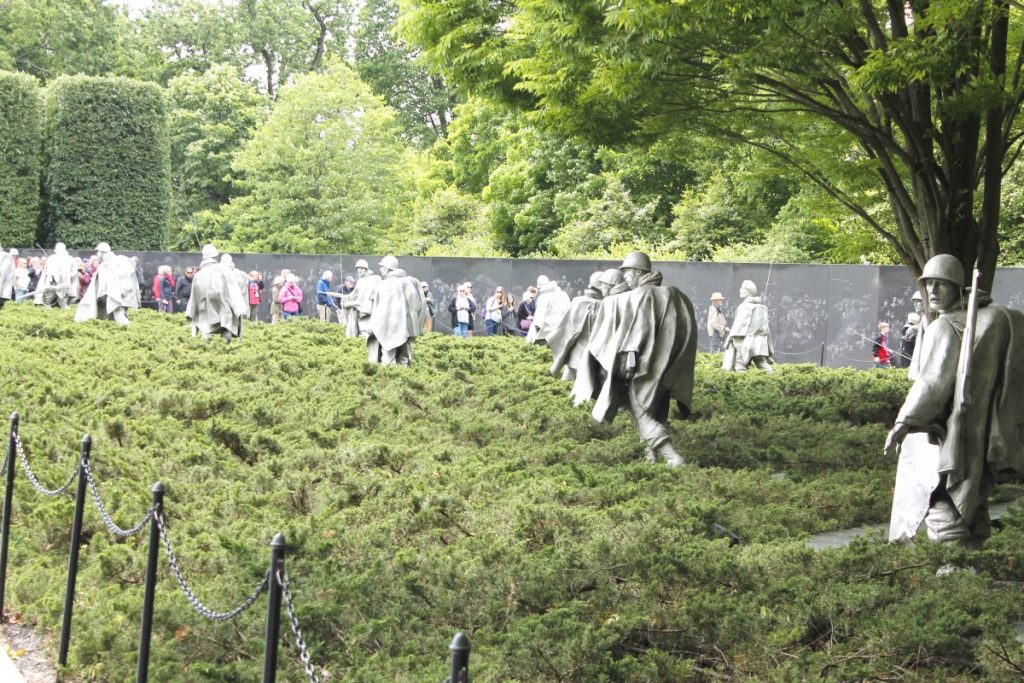 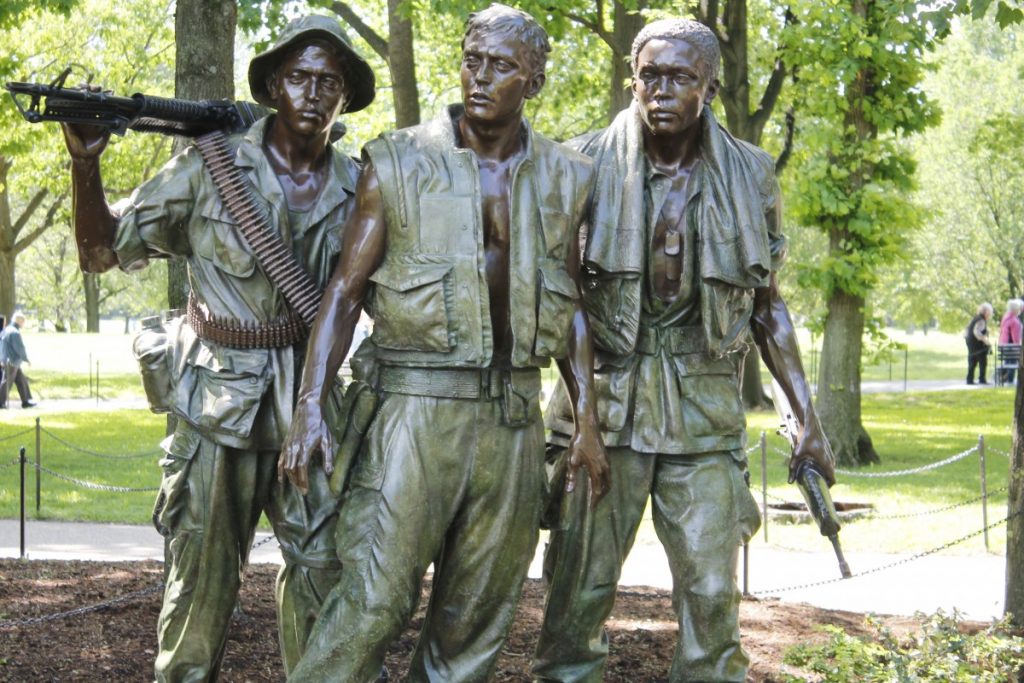 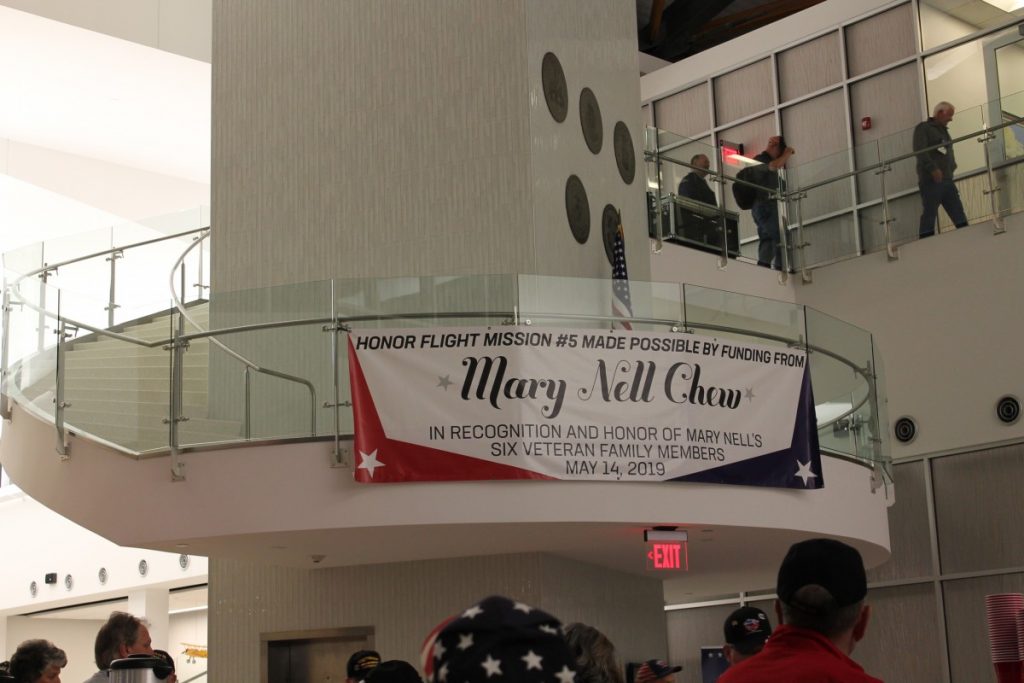 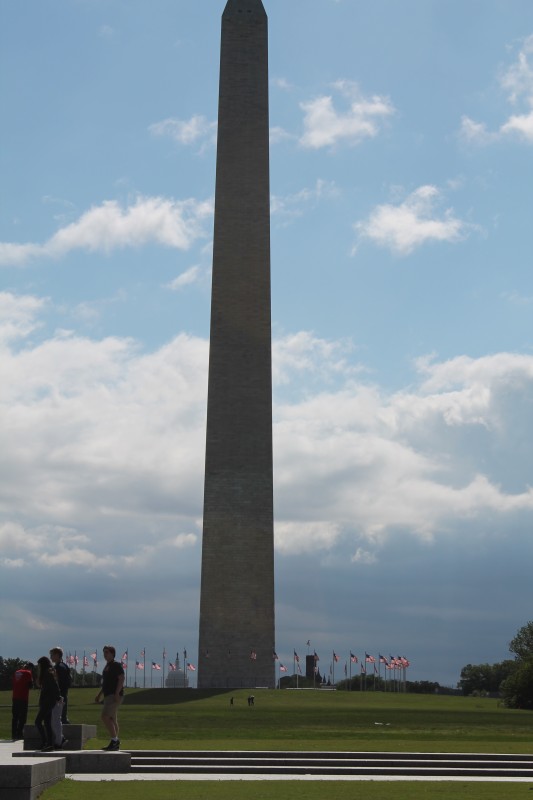 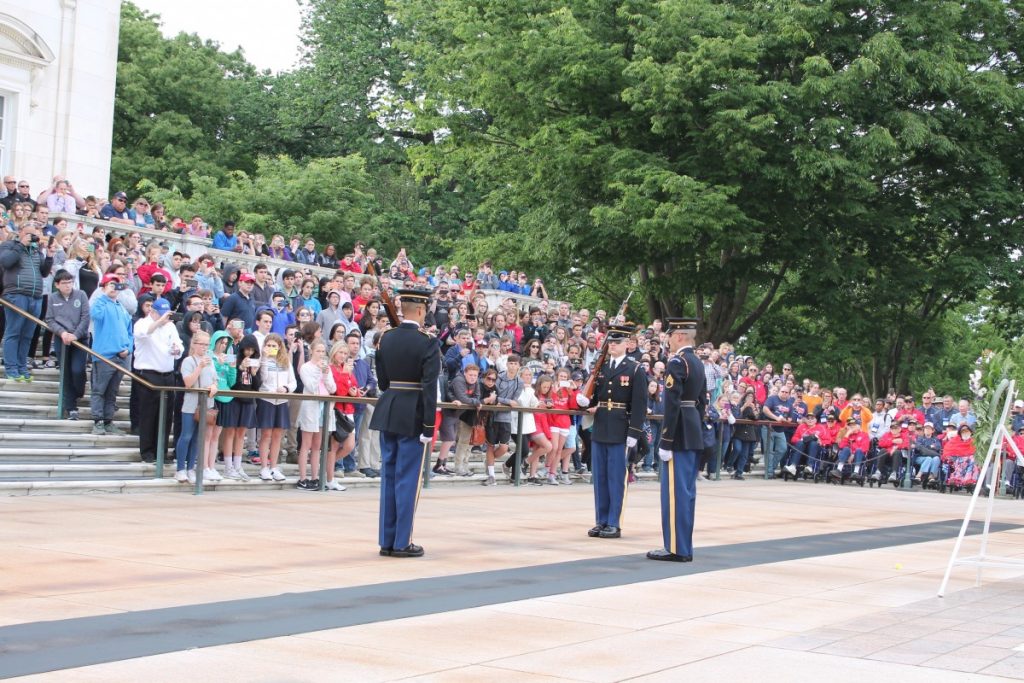