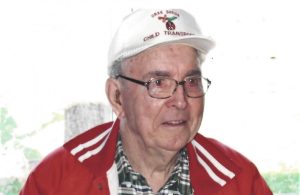 Bobby Gene Ralph was born on July 9, 1929, in rural Hardin County, Illinois, the son of Frank and Lena (Robinson) Ralph. He passed from this earth on Wednesday, April 3, 2019.
Bobby was preceded in death by his parents; his wife, Martha Faye Ralph; two brothers; and four sisters.
He is survived by his seven children, Judy (Tom) Lloyd, Mooresville, IN; Connie (Ron) Potts, Parkersburg, WV; Roger (LaDonna) Ralph, Greenwood, IN; Melinda (Daniel) Holtzclaw, Jackson, TN; Lena (Robert) Mayer, Harrisburg, IL; Barbara (James) Weber, Hilliard, OH, and Martha Drake, Portage, IN. Bobby is also survived by 17 grandchildren; 13 great-grandchildren; and his younger brother, Jerry Ralph of Springfield, IL.
He was employed for 45 years at Inland Steel Company in Gary, IN and lived in Portage, IN for 60 years. He was a Shriner and a member of the Masonic Lodge for over 60 years. He served on the Shriner Child Transport Unit, taking children for treatment to the Shriner Hospital in Chicago for many years following his retirement.
On Wednesday, April 4, 2019, a visitation was held from 5-7 p.m. at G.H. Herrmann Funeral Home in Greenwood, IN where the Masonic Funeral Service was conducted by Lodge brothers from several Lodges in Indiana, including the Dunes Lodge of Portage. On Saturday, April 6, 2019, an outdoor funeral service was held at 12 p.m. on the creek bank at the Ralph home place near the Old Iron Furnace with burial in Rose Cemetery. Family received visitors from 10 a.m. until time of service. Aly Funeral Home, Eddyville, IL was in charge of the funeral and burial.