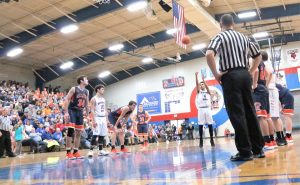 Hardin County beat out Pope County and then Cobden, the number 1 seed team, to make it to the final round against the Gallatin County Hawks; Cougar Gavin Smith advanced to Sectionals in 3-Point Showdown

By Heather Rash
Reporter
The Hardin County Cougars High School Boys Basketball team hosted the 2019 Regionals last week. Cougar Chaos was in full force as Oxford Gymnasium was filled with large crowds with the basketball spirit.
The Cougars faced the Pope County Pirates for the first game of the Regionals Monday, February 18. The Cougars took the win in overtime moving on to the next round of the tournament where they took on Cobden Wednesday night. Again, the Cougars prevailed, winning the game at the buzzer. This put the Cougars in the championship game against the Gallatin County Hawks Friday night.
“Oxford Gymnasium was packed with Cougar fans at the championship game”, said Hardin County Athletic Director Sharon Austin. There was so much support shown to the boys and coaches during the tournament. Despite the team’s efforts and hard work, the Cougars lost the game to the Hawks with a score of 52-64. The Cougars earned the title of 2nd Place in the Regionals.
After the game, Cougars Head Coach Rodney Lane congratulated the Hawks on their win and had this to say to his own team: “To my guys ! I couldn’t be more proud of each and every one of you! The excitement from the guys on the bench, you guys all treated each other like family and I love you all. My four seniors are four of the best young men I have ever coached and I have no doubt they will find success in whatever path they choose in the future. This team never quit fighting through two overtime games, and then found yourself down 14 tonight and fought back to two. To this group of youngsters on this team, keep working, you have a very bright future. I am a hard coach but I love my kids and will always fight for them and try to only get their very best.”
Coach Lane also congratulated Freshman Gavin Smith for becoming a finalist in the Country Financial Regional 3-Point Showdown that took place before the championship game Friday night. He made 9 of 15 3-pointers. Smith is the son of Gretta and Bobby Smith of Elizabethtown. He will compete again in the Sectionals at Gallatin County Friday, March 1 at 5:30 p.m. Doug Kaegi with Country Financial, donated and his family helped present plaques at the 3-Point Regional Showdown. 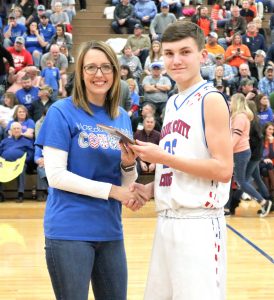