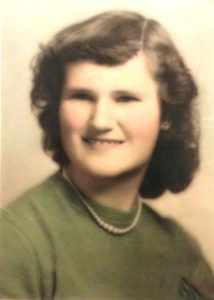 Bobie Jo Dehn, better known as Barbara, was born December 3, 1935 to Ruby Adams Dehn of Brushy Creek, Illinois, and Joe Dehn of Oklahoma. Barbara was abandoned by her father as a baby and her mother passed away in February 1947 when she was twelve years old thus leaving her to be cared for by her grandparents, Henry and Caroline Golliher Adams.
Barbara attended Mt. Moriah Church as a girl and learned to play piano. She graduated from Galatia High School in 1953, and soon after, went to Manteno for clerical work at the state hospital. It was there that she met Delcie Vinyard who also was working at the hospital as a nurse. Delcie thought Barbara would make a good wife for her son Lewis. Soon after, they married and made their home in Southern Illinois.
Bobie (Barbara) and Lewis had four girls: Sandra 1955, Olettia 1956, Jo Anne 1957, and Barbara Jean 1959. This kept Barbara very busy keeping house for many years to come as she sewed the girls’ clothing, cooked, cleaned, gardened, and canned from the garden.
Later, to help supplement Lewis’s income, Barbara worked at the local factories such as the glove factory, cap factory, cabinet factory in Shawneetown, and the Popcorn factory in Ridgway. Also, she worked as a secretary for Karbers Ridge Grade School, and later after the girls were raised, she worked at the Shawneetown Nursing Home as a CNA until her retirement. After her retirement Barbara enjoyed quilting and made many quilts and gave them away to family and friends. Barbara was a member of Vinyard Chapel Church and was baptized into Christ by Brian Lewis at the Iron Furnace.
In 2014, Barbara sent in for DNA and discovered that her father was not a Dehn, but in fact was a Peters. Barbara never had the opportunity to meet her father (Alfred Samuel “Joe” Peters from Oklahoma) nor her paternal grandparents and family, so that link still remains a mystery to all.
Lewis was seriously injured in a tractor accident in 2005 and passed six months later that year on December 28th. After his death, Barbara enjoyed going to the Golden Circle, spending time with her friends there and singing karaoke.
Barbara passed away on November 29, 2022, at Hardin County General Hospital in Rosiclare, IL.
Barbara leaves to mourn four daughters: Sandra (Felix) Vinyard of Evansville, IN, Olettia (Ken) Gleason of Rosiclare, IL, Jo Anne (Glen) Elder of Rosiclare, IL, and Barbara Jean (Greg) McDowell of Cave In Rock, IL; seven grandchildren, Olivia (Shannon) Bradley of Shawneetown, Garrett (Abby) Roe of Ridgway, Jonathan Roe of Carmi, Heather (Roger) Boyd of Godley TX, Billy Joe (Leslie) Schmarje of Cape Girardeau, MO, Nick (Melissa) McDowell of Elizabethtown, and Annie (Kyle) Blair of Elizabethtown, IL; eleven great-grandchildren: Ansley (Matt) Boulds of Eldorado, Maddie and Laney Naas od Shawneetown, Lenox Roe of Mt. Vernon, IN, and Brielle Roe of Ridgway, Lakyn Wheeler of Fort Worth, TX, and Ashton Wiseneske of Godley, TX, Briley and Travis McDowell of Elizabethtown, IL, and Bristol and Kimber Blair of Elizabethtown, IL; one great-great -grandson: Master William Lane Boulds of Eldorado, IL.
Services for Barbara Vinyard will be held on Friday, December 2, 2022, at Hardin County Funeral Service in Rosiclare, IL at 12:00 p.m. with burial to follow at Vinyard Cemetery. Friends may visit from 10:00 a.m. until time of service at the funeral home.