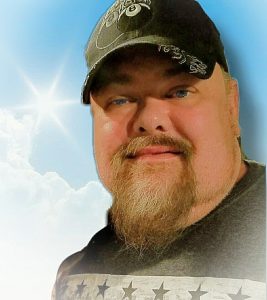 Robert Elliott Cook was born on August 16, 1968 in Alton, Illinois to Bob and Ellen Cook of Springfield, Illinois. Robert, better known as Robbie, graduated from Glenwood High School in 1986.
Robbie was born under the celestial sign of the Lion. This endowed him with a big brave heart and a lifelong love of lions. He was a great son, brother, uncle, nephew, cousin, and friend.
Robbie was a lifelong resident of Springfield, Illinois, but his thoughts and imagination knew no bounds. He had an adventurous spirit and loved a bargain, a joke, and “Gunsmoke”. In his youth, Robbie loved to sing, steal bases and ride his bike over ramps. As an adult he found it impossible to be conventional whether in food or politics. He was determined to live his life his way. He vehemently defended the rights and opinions of himself and others.
Robbie’s first job was during high school at a local gas station. He displayed the courage and heart of a lion when he single handedly chased down a thief that stole several gallons of gas while he was working. Robbie did call the police but without a thought for his own safety, he relentlessly pursued the culprit-even though he did leave the gas station unattended.
Robbie’s work career was an example of the variety of life that he sought and the adventure seeking soul that he possessed. During the day, Robbie worked for agencies of the State of Illinois, (EPA, Health and Human Services, Department of Revenue, and Department of Economic Opportunity) and during the evening, he donned his leather cuffed bracelets, motorcycle boots and invaded the hearts and minds of the people of Springfield when he worked as DJ “Razor” on WQLZ. He also DJ’d a Sunday night radio show that highlighted central Illinois rock bands. Robbie was always on the cutting edge in music and some of his favorite bands included Metallica, Nirvana and Smashing Pumpkins before others knew who they were.
Robbie’s other second jobs included photographing models and weddings, being a concert promoter, and a recruiter and promoter for Fight Club. Robbie was very artistic and became a self-taught website developer for WQLZ, WTAX, various modeling agencies and other companies when the internet was the new thing.
Robbie loved music and enjoyed attending concerts; researching rock music bands and its members; riding his motorcycle, exploring YouTube for educational material, reading and watching AEW wrestling. Robbie wanted to experience life, enjoyed people, strived to put a smile on everyone’s faces and when no one was looking-displayed his soft side when taking care of his rose garden.
It was very hard to say goodbye to Robbie and his unique personality. That hardship is offset by the knowledge that he is now safe in the arms of the Lord, without the illnesses and injuries that were for several years a constant source of pain and frustration.
Robbie left this life, peacefully, on Saturday, October 1, 2022, surrounded by his family, after an extended illness. Robbie leaves behind to mourn him, his parents Bob and Ellen Cook; his brother Thomas (Tanja) Lagisse and niece Emma; uncles Bertis (Becky) Cook and Ronnie Malcom; aunts Mary Pomatto (Ed), Cindy (Kevin) Carman and Dottie Cook; great aunt Lilly Pauline Pennell; cousins Sean, Billie Jo, Tara, Penny, Nickie, April, Jennifer, Courtney, Andrew, Nicholas and Nathan. Robbie was welcomed home in Heaven by his grandparents Henry and Nora Cook, Maxine Elliot Tucker and Jesse Willard Tucker; uncles Bill (Peggy), Bud, Bennie, Barney; and aunts Bonnie and Patty Jo.
Goodbye and Godspeed to a brave and independent soul.
A memorial gathering will be held at Bisch and Son Funeral Home, 505 E. Allen Street, Springfield, Illinois on Thursday October 6, 2022 from 5:00 p.m. to 7:00 p.m. and a graveside service will be held at Central Cemetery in Elizabethtown, Illinois, on October 10, 2022 at 12:00 p.m.
In lieu of flowers, the family is asking for donations to American Diabetic Association of America or American Heart Association in Robbie’s honor.