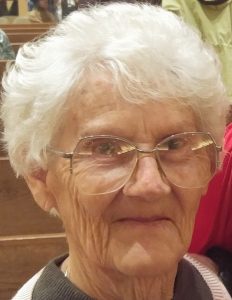 Doris “Dottie” Jean Kirk Blair, 91, of Bloomington, IL passed away peacefully on Tuesday, March 8, 2022 at OSF St. Joseph Medical Center, Bloomington, IL. She was born on November 19, 1930 in Rosiclare, IL, the eldest child of Vernon “Doc” and Gladys (Jackson) Kirk.
She married Prentice R. Blair of Cave-in-Rock, IL on February 2, 1951 at the Rosiclare Methodist Church. From this union, they were blessed with one child, Jeffrey.
Dottie always spoke fondly about growing up in Rosiclare with her sisters and brothers and working at the Capitol Theater as a teenager. After her husband accepted a teaching job in Bloomington, they relocated there in 1953, even though their roots remained in Southern Illinois.
She loved her family and was particularly proud of her granddaughter’s accomplishments and creativity. She loved the challenge of a good crossword puzzle and was a fastidious homemaker who was constantly working in her house and yard.
She is survived by her son, Jeffrey (Melissa) Blair of Bloomington, IL; her granddaughter, Anna Blair of Chicago, IL; brothers-in-law, Jerry Oxford of Carmi, IL and Jerry Austin of Mercedes, TX; sisters-in-law, Mary Blair and Emma Blair both of Shawneetown, IL, and Darlene Kirk of Paducah, KY; and numerous nieces and nephews.
She was preceded in death by her father and mother; her husband, Prentice Blair; brothers, Paul Wayne and Phillip Leroy Kirk; sisters, Linda Mae Oxford and Carol Austin; and many friends.
Cremation rights were given by Calvert-Metzler Funeral Home, Bloomington with a Celebration of Life being held at a later date.
Dottie will be greatly missed, but she is rejoicing in Heaven with loved ones.