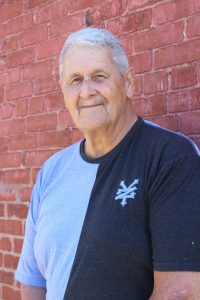 Wendell “Skip” Brownfield was born August 2, 1948 at the old Rosiclare Hospital to Granville and Fern (Turner) Brownfield and passed away Thursday, March 24, 2022 at Baptist Health Paducah.
He attended Rosiclare Grade School and High School and earned an associate degree at SIC.
He was drafted in June 1969 and went to basic training in Fort Leonard Wood, Missouri and nine weeks at Fort Ord, California. Skip left for Vietnam that November. He spent five months in the infantry with the 3rd of the 1st 11th Brigade and was awarded the Combat Infantry Badge (CIB) and transferred to the 174th Aviation Company for 7 months as a door gunner on a helicopter gun ship where he was awarded the air crewman wings with the Americal Division. He came back home November 1970.
He was awarded several medals, including the Bronze Star with V for Valor, 2 Air Medals with V for Valor, the Vietnam Cross of Gallantry (awarded by South Vietnam) and his unit received a Presidential Citation For Action. Skip also received an accommodation from the 116th Congress House of Representatives for pulling two wounded soldiers out of the jungle while under fire. He lost his best friend that night, Big Perry. Congressman John Shimkus came down to the Golden Circle in Elizabethtown and presented the award to Skip.
After leaving the Army, Skip joined the Hardin County Sheriff Department as a deputy sheriff. He was involved in a shooting on a domestic call in May 1976, where he was shot twice before he was able to return fire and end the shootout. He was elected sheriff for four years.
After 17 years in law enforcement and 16 years as county commissioner, Skip spent 20 years working for the Illinois Department of Natural Resources.
Skip leaves behind his children, Wendy (Roseberry), Josh, Ashley (Macklin), Alex (Abby) and Jasmine (Kasi); grandchildren, William, Connor, Jaxson, Chance, Zack (Sanders), AJ (Sanders), Chandler and Gracelyn; nieces and nephews, Tina, Tabatha, Brenda, Katy; great niece, Trinidy; cousin, Barbara Jo (Riley) Patterson; brother-in-law, Donnie Colonna, who was like a brother to him.
He was preceded in death by his mother, father, brother (Dean), 3 aunts, 2 grandfathers, 2 grandmothers, 2 uncles and niece, Dena.
Skip joined the Elizabethtown First Baptist Church and accepted Jesus Christ as his Savior in November of 2004. Skip was very proud of his kids and said they made him a better person. Skip’s final thought was that he just wanted the country to be proud of him.
Memorial services will be held on Saturday, April 2, 2022 at 12 pm at the Elizabethtown First Baptist Church. Hardin County Funeral Service is in charge of arrangements.