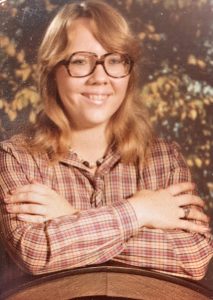 Sandra Lynn Dutton, 60, of Cave-In-Rock, IL died Tuesday, February 8, 2022 at Gallatin Manor Nursing Home in Ridgway, IL. She was a member of Honey Comb Church.
Sandy was a graduate of Equality High School. Her short time on earth took her to multiple destinations and gave her many life experiences. Ultimately, she set her roots down in Hardin County. She had numerous creative talents that set her apart from those around her. Perhaps one of her greatest strengths was her skill for writing. She found a sense of community amongst those who enjoyed her words. Although she can no longer physically convey her ideas to others, those thoughts live on in the hearts of all who knew and loved her.
The legacy she leaves behind includes her children, Charles Raymond (Crystal) Borum of Rosiclare, IL, Christine Lucille (Braxton) Raben of Ridgway, IL, Jessica Wouness Dutton of Henderson, KY and Jamie Rae Dutton of Cave-In-Rock, IL; grandchildren, Tristin, Makalee, Lance, Aiden, Bryson, Camdyn, Alex, Tyler, Landon and Jasmine; brother, Joe Lee; and sister, Karen (Charlie) Ensminger.
She was preceded in death by her husband, Terry Ray Dutton; daughter, Cynthia Gayle Renfro; parents, Jack and Carol Koker and brothers, Larry and James A. Koker.
May she rest peacefully in the arms of those she longed to see again.
Memorial services will be held at a later date. Hardin County Funeral Services in Rosiclare, IL is in charge of arrangements.