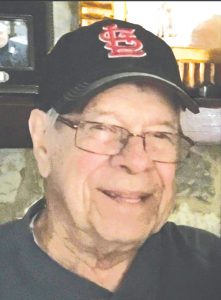 Terry A. Nelson, 84, passed away on Monday, January 24, 2022 after a long, hard, battle with cancer, at Carle Hospital in Champaign, Illinois. He was born the son of Cecil and Catherine Nelson on December 8, 1937 in Rosiclare, Illinois.
Terry leaves behind the love of his life of 28 years, his wife, Sandy Nelson; his son Tony (Dana) Nelson of Scranton, Pennsylvania, 3 daughters, Teresa (Gary) Little of Davenport, Iowa, Rebecca Nelson of Alexis, Illinois, and Kathleen (Rene) Rocha of Peoria, Illinois; 11 grandchildren, 14 great-grandchildren, 1 great-great-grandson; his sister, Winnie Starling of Florida; as well as many nieces and nephews.
Terry was preceded in death by his parents, Cecil and Catherine Nelson; and siblings, Mary White and Jimmy Nelson.
Terry proudly served his country in the United States Army and his community as a police officer (Rosiclare, Illinois). Terry later retired from American Minerals, also in Rosiclare.
Terry was a member of the American Legion, Post 210 and of Fairview Sportsman Club since 2004, where he felt most at home.
He loved riding the grounds on his golf cart and visiting with friends. He was also an avid St. Louis Cardinals fan.
A VA Military service will be held on Friday, February 4, 2022 at 11:00 a.m. at Danville National Cemetery with military rights.
In lieu of flowers, donations may be made to Carle Center for Philanthropy for the Carle Cancer Institute where Terry received care above and beyond extraordinary. Our heartfelt thanks to all doctors, nurses and staff, including housekeeping, for their compassionate care.
Online condolences are available at www.watsoncremationservices.com .