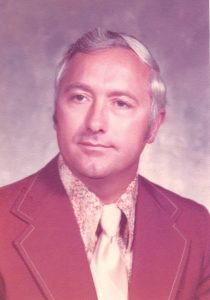 Billie Dean Leonberger was born December 10th, 1933 in Hardin County. He was raised in the Rock Creek area by his parents, Melita and Guy Leonberger, and his grandparents, Milas and Pearl Hobbs.
Bill graduated from Cave In Rock High School in 1954. From there he joined the Marines. I laughed at the story he told me… he ran into his buddy, Glenn Ozee, on a Saturday night. He was leaving on a bus Monday for Basic for the Marines… Dad asked if they’d take one more? He left out that Monday for Basic Training in California. While in the Marines, he was stationed in Okinawa, Japan and Camp Lejune in North Carolina.
After his service, he went to college at Bethel College in McKenzie, TN, to obtain his teaching degree. That is where he met the love of his life, mother of his children, and the one who has always stood by and cared for him, Sue Blackburn Leonberger. They were married in October 1958.
To this union, they had three daughters: Lynn, Tina and Leighann.
Bill started his teaching career at Rosiclare High School in 1960, Dean of Students at Hardin County School 1984-1988, and then on to Vienna Correctional Center as Education Administrator, until he retired. During that time he was also high school basketball coach. I’ve heard many stories from past students and players about how Bill, AKA “The Man”, helped guide, lead and change the lives of many of his students. From changing clothes with a student for the day because he needed dress clothes, to holding his students who he saw something in to a higher standard to make sure they didn’t fall through the cracks.
As a basketball coach, he loved conditioning and pushing them to their limits. He demanded respect and in return he was a leader. He made you walk that line not to be an authoritarian, but because he cared. He wanted the best for his students and if he saw something in you, he might just show up at your house and make you go to school. He might be waiting for you on the sidewalk of the school to only give you “that look” and that’s all he needed to do. Or, he has been known to throw a disrespectful teenager in the trunk of his car, take them for a few spins at the Sands, and return him back to the Dairy Bar and that student never mouthed him again. If you were a male student, he liked to approach you from behind with his infamous “claw” on the back of the neck and ask how are you today, to remind you he’s watching. For all of the stories I’ve been told, the best stories have been from the male students from troubled homes, to approach dad later in life to thank him for riding them so hard, for seeing something enough in them, to hold them to a higher standard, because they wouldn’t be who they are today without him caring and pushing them. And let’s not forget that paddle with the holes in it and he would make you sign it! Nobody wanted that paddle, LOL.
After Bill retired from VCC, he played a very active roll with his grandkids and great-grandkids. Lynn and Steven had Tyler and Travis. Tina and Tony had Jay. Leighann and Rich had Aundrea, Abby, Keely, and Conor. Audrea and Jeremy had Gabriel an Eli. Tyler and Kendal had Addie and Jack. Travis and Jayna had Bo.
Bill loved his wife and family very much. He was always a provider and was always there for his kids and grandkids. He has been a role model and father figure for all of the grandkids after deaths and divorces of previous sons-in-law. He stepped up and played a roll of raising his grandkids while continuing to be there for his daughters, wife and families. He was there every step of the way. He never thought twice, just provided. He was a prideful man, who ran his home a lot like the school, very stern and expected more from his own kids. But despite his rough exterior, we, his family, knew he loved us and we loved and respected him all the way to the very end.
When dad got sick, we didn’t want the nursing home for him. Not for the man who always showed up for us…physically, financially, and emotionally. Mom has spent the last few years being dad’s main caretaker, and with Aundrea, Conor and us three girls when needed. Mom was the main caretaker for dad, day and night. We all did our best to help out, but she deserves the praise for his care and everything until he passed. All of his family gave back the love and support he had given to all of us until his passing.
Months before dad passed, he had spoken of his wishes to accept Jesus Christ as his Savior and to be baptized into the Church of Christ by Preacher Justin Hastie, with his grandsons lifting him into the water and his family by his side.
In his final months, he fought a long, hard battle. He loved his family so much, he tried to hang on as long as he could. He passed on loving us, and knowing just how much we all loved him back. On Wednesday, January 26, 2022, Bill, dad, pap, “The Man”, left us and went to be with the Lord. He is no longer in pain and he’s rejoicing in heaven with his parents, grandparents and sons-in law, Steven and Tony.
This isn’t “goodbye”. We don’t do goodbyes in this family. We will see you again…until then, we know you’ll be rejoicing in heaven watching over us and protecting us forever and always.

Written by his daughter, Leighann