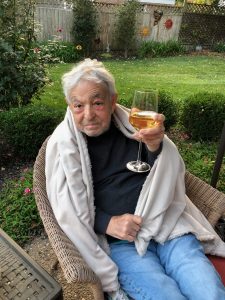 On Tuesday, January 25, 2022, Ronnie M. Tadlock passed away with all his children and his grandsons by his side. Ron was the only child of Mattie (Tommie as we all knew her) Lewis Collier and James Orval Tadlock, and stepson to Carl Collier.
Ron was the adoring father of Billy Chapman, Debbie Chapman, Kimberly Tadlock-Peluso and James Tadlock; grandpa to Jacob, Joshua, Emeline, Madison, Caroline, Jack, Harlee, Chloe and Antonella; great-grandfather to CeCe and Tai; friend to former wife, Linda Chard; cousin and friend to so many.
Ron spent most of his youth in Southern Illinois where he loved to hunt for squirrel, rabbit and quail. He could replicate the sound of a squirrel like no other and had perfected his quail call.
Growing up on a farm gave him a strong work ethic which took him to the military. He served in the United States Air Force for 26 years. During his years in the military he was transferred all over the U.S. and abroad. He served in the Vietnam war as a photographer and ended his career as a Senior Master Sergeant at Scott Air Force Base.
Ron (aka) “Spud” was the happiest when he was spending time with his family, immediate and extended, watching football or baseball, playing poker, indulging in a bit of Bailey’s Irish Crème or a sip of a good chardonnay. He enjoyed fishing and hunting with his sons and grandsons. He loved sharing his life stories and adventures with his grandchildren. He had extensive knowledge of current and past sports. He loved watching football, but especially the Kansas City Chiefs. He was a lifelong fan of the Cubs and was thrilled when they finally brought home that world series win in 2016. He loved to talk politics and hated Fox news. He was an avid bowler, having bowled a 300 many times over. Ron seldom met a stranger, and he was seldom at a loss for words.
He will be remembered as a fiercely loving, loyal and selfless dad, grandpa and friend.
Thank you for all the beyond wonderful years we got to spend with you. Dad, our world will never be the same without you in it.
Services will be held Sunday, January 30, 2022 at Hardin County Funeral Services located at 6 Stone Church Road, Rosiclare IL.
A visitation will be held from 11 a.m. until time of the funeral service at 2:00 p.m. Internment will directly follow at Cave Hill Cemetery in Cave In Rock, IL.
In lieu of flowers. please make a donation to the Belleville Illinois Humane Society.