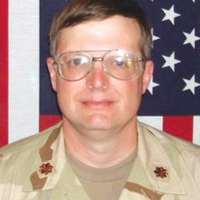 David Alan Patton, 58, of Lawrenceville, Illinois died on Sunday, December 12, 2021 at Franciscan Health in Indianapolis, Indiana.
He was born on November 13, 1963 to Elsie (Kaegi) and Charles Patton in Belle Fourche, South Dakota.
David retired from the United Sates Air Force as a Major and served in Afghanistan for 14 months.
He is survived by his father, Charles Patton of Bridgeport; his wife, Mindy Patton of Lawrenceville; two children, Jessica Lynn Patton of Indianapolis, Indiana and Andrew David Patton of Lawrenceville; and sister, Cyndi (Tom) Payne of Boonville, Indiana.
David was preceded in death by his mother Elsie Patton.
A graveside service for David will be held at 2:00 p.m. on Sunday, December 19, 2021 at Cave In Rock Cemetery, Illinois with Military Rites.
There will be a visitation on Saturday, December 18, 2021 from 4:00 to 6:00 p.m. at the United Methodist Church in Bridgeport, Illinois.