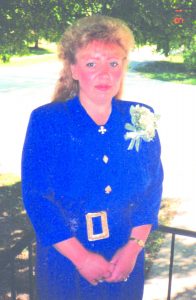 Sandra Conkle, age 67, of Elizabethtown, passed away at 1:49 p.m., Monday, October 25, 2021 at St. Vincent’s Hospital in Evansville, Indiana. Sandy was born on September 19, 1954 in Rosiclare to Lynndale and Shirley (Pennell) Rose.
She married Ed Conkle on December 14, 1993 and he preceded her in death on December 10, 2011.
Sandy was a member of Rock Creek General Baptist Church and was an LPN. She worked for Hardin County General Hospital in Rosiclare for 35 years. Sandy served on the town board for 19 years, most of this time her brother Eddie Rose was Mayor. She was instrumental in acquiring grants to buy the new city hall and build the new fire department where her husband, Ed was the Fire Chief.
Ed and Sandy were very good cooks. On the holidays, they always cooked a large meal. They would always make and deliver plates of food to the elderly before they would eat any of it themselves. They would even feed the people that were in the jail. After Ed’s passing, you could find Sandy most of the time in her yard. She had the most beautiful flowers, particularly roses, in town.
Sandy and Ed had no children, but her two brothers, Dickie and Eddie, let her claim their children, grandchildren and great-grandchildren as her very own. They filled her life with much love and Sandy never missed having children as long as she had all of them. Her brothers were always as close as the phone.
She will be missed by her mother, brothers, and all her family as long as they live.
Sandy is survived by her mother, Shirley Rose of Cave-in-Rock; brothers, Eddie Rose and wife, Bridget of Elizabethtown; Danny Rose of Cave-in-Rock; and Dennis Rose of Cave-in-Rock; nieces and nephews, Jeffery Rose of Elizabethtown, Justin Rose and wife, Michelle of Rosiclare, John Rose of Elizabethtown, and MaKayla Rose of Elizabethtown; and great-nieces and nephews, Taylor Rose, Honey Rose, Braden Rose, and Camilla Rose.
In addition to her husband, Ed, Sandy was preceded in death by her father, Lynndale Rose, and a brother, Richard “Dickie” Rose.
Graveside memorial services will be held at 1 p.m., Saturday, November 6, 2021 at Rutherford Cemetery at Elizabethtown. Rev. Randy Vaughn will officiate, and burial will follow in Rutherford Cemetery.