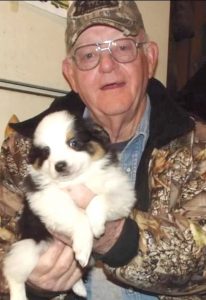 William Dewayne, better known to his family and friends as “Dewayne”, was born on March 27, 1947, in Rosiclare, Illinois, the first-born child of Wayne and Alma Irene (Lowrey) Ashford. He was raised on a farm in the St. Joseph community of Hardin County. Between his Junior and Senior year of high school, he went to Michigan with some friends to work.

After graduation from Rosiclare High School in 1965, he joined the United States Army and served three years, during the Vietnam War. Some of this time was spent in Germany where he learned to enjoy the food. German chocolate and German pickled eggs remained favorites for the rest of his life.

Upon his return to Illinois, he married a neighboring farm girl, Betty Cowsert, on October 29, 1970, in Springfield, Illinois. To this union two daughters were born, Kellie Sue and Anita Lynn. After a few years in Springfield, they moved to the Wood River area and then returned to Hardin County.

Dewayne was a lifelong welder by profession. He worked on everything from train cars in a railroad yard to machinery in rock quarries. He retired four years ago and spent his retirement helping Betty with the yard and house, and pampering his dog. Dewayne had a love for any dog, but a greater love for his dog! After retirement, he spent many companionable hours with his dog.

One of Dewayne’s favorite pastimes was debating with anyone he could find as a worthy opponent. Betty told him it was arguing; however, he did enjoy it by whatever name it was called.

Dewayne was preceded in death by his parents; father and mother-in-law, Ulys and Audrey Cowsert; brother Deneen Ashford; and a sister LaDonna Hall.

Funeral services celebrating Dewayne’s life will be held at 11:00 a.m., Friday, October 8, 2021, at the Honey Comb Church of God, 99 Karbers Ridge Road, Herod, Illinois, with Brother Harold Miller officiating. Burial will be in the Cowsert Cemetery near Rosiclare, Illinois, with full military rites by the Paul C. Rowan American Legion Post #571. Visitation will be held from 5:00-7:00 p.m., Thursday, October 7, 2021, at the church.
In loving memory of Dewayne, memorials may be made to the Cowsert Cemetery c/o the Ashford Family, PO Box 428, Elizabethtown, Illinois 62931.

Arrangements are under the care of the Meyer Funeral Home in Newton, Illinois. The obituary can be viewed and condolences left at www.meyerfh.com.