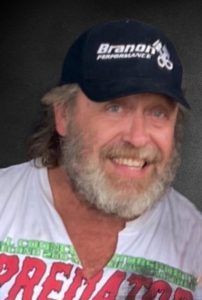 Steven “Steve” Leon Hohimer, age 54, of Henderson, KY, passed away on Sunday, September 19, 2021 in Evansville, IN.
Steve was born in Rosiclare, Illinois to Leo and Barb Hohimer on January 24, 1967. Steve lived all his younger years in Cave in Rock, Illinois and attended school at Hardin County. Upon graduation, Steve went to Nashville, TN where he attended Nashville Auto/Diesel College. He never wanted to be anything but a mechanic so he made his life’s work at being the best mechanic he could be, and let me tell you, he was one of the best.
He is survived by his wife, Neeve; his parents, Leo and Barb; his son, Josh ( Kelsey ) Harper; the highlight of his life, his special one and only granddaughter, Lyla Harper; and a host of aunts, uncles (special uncle Tom), nieces and nephews. Steve had many friends which he called his racing family with two special ones, Jeannie and Mike, and some of the best co-workers any guy could have.
Besides Steve’s love for his work, his one passion was drag racing. It lasted from his college days until the present. Steve was never too busy to help a fellow racer and most every weekend from April through October you could find him at the racetrack either close to home or as far away as Alabama.
Visitation will be Friday, September 24, 2021 at Tomblinson Funeral Home, Henderson Chapel from 4-8 p.m. and from 9-11 a.m. on Saturday, September 25, 2021 with the funeral to follow at 11 a.m. Rev. Artie Fulcher will officiate. Burial will be at Roselawn Memorial Gardens in Henderson.
The family wishes to extend their gratitude to all who are able to attend the service to honor his life. Special thanks to the pall bearers, preacher Artie, and the funeral home.
Online condolences may be shared at www.tomblinsonfuneralhome.com.