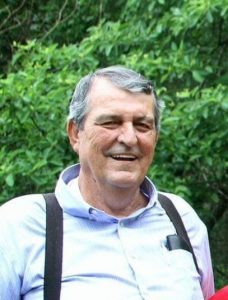 Gaylord Holbrook, 71, passed away on Friday, May 21, 2021 at the VA Medical Center, CLC Hospice Unit in Marion, IL.
Bubby, the name he was commonly known by, was born on June 15, 1949 in Rosiclare, IL to the late Adrian and Julia Holbrook. On June 15, 1979 Bubby married Willa Holbrook, whom preceded him on December 15, 2018. They have three children.
Bubby lived a very full and meaningful life. He was a very giving man with a heart that was as big as the love he had for his family. He was very humorous and had the kind of personality that put people at ease and allowed them to be themselves around him. He never met a stranger nor did he ever make a new acquaintance feel like they were one. He loved to share a good joke and could have a conversation with anyone about anything. He was happy anytime he could do anything to help others whether they asked for his help or not. There are so many different words that could be used to describe who Bubby was and what he meant to the people in his life, but if you knew him, then you know how special he really was and will continue to be in our memories of him.
He graduated from Rosiclare High school in 1967. He went to SIC on a basketball scholarship and played for a year before he decided the next chapter of his life would be to join the United States Navy. He enlisted in the Navy in October 1968 and from there he would spend the next few years traveling the world on aircraft carriers USS America and USS Coral Sea.
While Bubby is now reunited with his wife, Willa, his beloved sister Bonita Martin and countless other family and friends whose memories he kept alive while he was here, he had to leave the following family behind for now: his daughters, Angela Renee (Jonathan) Shaw of Eldorado, Gayla Adrianne (Hassan) Holbrook, Eldorado; son, Christopher Gaylord (Melissa) Holbrook of Golconda; grandchildren, Brandon Sauls of Eldorado, Michael, Justin and Haleigh Shaw of Eldorado; brothers, James Holbrook, Harrisburg, Chester (Penny) Holbrook, Elizabethtown; sisters, Rebecca Barnard, Elizabethtown and Joey Lewis, Rosiclare; his sister and brothers-in-law, James and Varnell Cummings, Harrisburg, Louella King, Pekin, IL, Ernest and Francis Ramsey, Golconda, Cathy Reynolds, Brookport, Billy and Christy Gallamore, Golconda and Ricky Gallamore, Florida. He has several nieces, nephews, cousins and many friends he leaves behind also.
While Bubby dearly loved all of his family he would want it to be mentioned that he shared a special bond with his great-nephew Mason. He enjoyed all the time he and Mason were able to spend together and Mason will always be “his hero”.
A memorial service will be held 11:00 a.m. on Thursday, May 27, 2021 at the Social Brethren Church in Golconda. Interment will follow the service at the IOOF Cemetery in Golconda. Visitation will be from 10:00 a.m. until time of the service at the church on Thursday.
Visit alyfh.com to leave an online condolence. Aly Funeral Home was in charge of arrangements.
Memorials may be made to: VFW Post 9227 PO Box 6 Golconda, IL 62938 or to any Veterans organization of your choice.